A solution of a system of linear equations is a tuple $(s_1, s_2, \dots , s_n)$ of numbers that make each equation in the system a true statement when the values of $s_1, s_2, \dots , s_n$ are substituted for $x_1,  x_3, \dots , x_n$ respectively. The set of all solutions of a linear system is called the solution set of the system. In order for a system of equations to have a unique solution we must have $m\ge n$, this does not guarantee the existence of a solution but is a necessary condition.

In this section we will consider systems of two equations which will be called $x$ and $y$ rather than $x_1$ and $x_2$ as used above.

There are several ways of solving systems of equations. We will give examples of three methods which are useful for small numbers of equations. 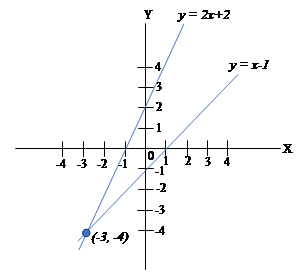 and note that the two lines intersect at $(-3, -4)$ which is the solution to this system of equations. Note that this method of solution is only useful for two equations in two unknowns.

For this method we multiply one or both equation by a constant and then add or subtract the equations in order to eliminate one of the variables. For example, suppose $$\begin{align}2x+3y&=8\\3x+2y&=7\end{align}$$

For more than two variables, several other techniques such as Gaussian Elimination, the Gauss Jordan Method or Cramer's Rule (see the Matrices page) can be used.