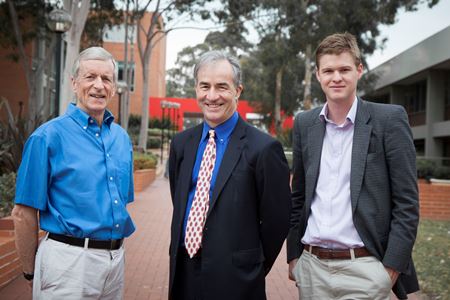 Professor Antony Hopkins with Professor Peter Hutchings, Dean of the School of Humanities and Communication Arts and Dr Brett Bennett.

A.G. Hopkins Returns to History at Western Sydney University  in 2014

In conjunction with the 'Inventing the International' ARC Laureate Program, Professor Hopkins presented a public lecture.

Globalisation envelopes the world - and historians too. The 'g' word is now mandatory in titles of books and articles; PhD students follow their leaders in dedicating their dissertations to the subject. Yet, not so long ago postmodern approaches to the past were equally compelling: if you could not tell your trope from your alterity and your Spivak from your Bhaba, your chances of landing a job were minimal. Wise investors buy at the bottom of the market and get out at the top. So, it is worth asking whether shares in globalisation have further to run or whether full value is already in the market. One way of answering this question is by considering the reasons why historiographical phases, like empires, rise, flourish and decline. This approach provides pointers to the current state of globalisation studies and offers an estimate of the current value of the shares. The advice does with a wealth warning; past performance has limited predictive power. As a famous trumpeter remarked when asked which way jazz was going: 'Man, if I knew which way jazz was going, I would be there already!'

This workshop with scholars from Western Sydney University and further afield focused on the forthcoming edited collection.

While a Western Sydney University Visitor, Professor Hopkins also visited the University of Melbourne and ANU.

Last year's visit: October 2013
During his two-week visit, Professor Hopkins participated in two workshops focused on globalisation and transnational history. A day-long workshop at Western Sydney University examined how Hopkins' earlier ideas on global history and globalisation could reshape research in major fields of historical inquiry. Historians came from Western Sydney University as well as from the University of Sydney, ANU and UNSW. Outside attendees included Glenda Sluga, John Gascoigne, Ian Tyrell, Melanie Nolan, Tamson Pietsch, Gregory Barton and Thomas Dubois.
After the workshop, Professor Hopkins presented a keynote lecture, 'The Real American Empire', based on his forthcoming book situating America's foreign policy and imperialism within the context of globalisation. Hopkins' key point was that America became more powerful globally when it lost its 'real' formal empire and took on a role as a superpower in a re-changed geopolitical world after World War II. The lively discussion after the keynote ranged from the history of American slavery to America's cyber-spying imperialism today.