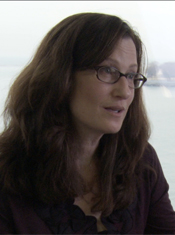 Monday, April 15, Lecture 1:
"The Politics of Public Things: Neoliberalism and the Routine of Privatization"

Tuesday, April 16, Lecture 2:
"What Kind of a Thing is Land? Between Cultures, Between Times"

Friday, April 19, Lecture 3:
"Going Through the Motions: Ceaseless Work and the Reduction of Publicity to Emergency"

Audio of this event can be found online through ABC Radio National (opens in a new window).

I am interested in thinking about things and their role in politics and public life. This interest is occasioned by the contemporary neoliberal impulse to privatize everything and the difficulty, in such a context, of preserving public things and of articulating the importance of public things to democratic life.

Where so many democratic theorists focus on the importance of the demos to democracy, theorizing the terms of inclusion, identity, or nation, I am drawn more to the idea of the importance of objects to democracy. AS we know from D.W. Winnicott, subjectivity itself postulates objects, it emerges in relation to objects which enable the transition from one developmental stage to another, from private to public and from self to other. What if democracy is rooted in common love for, and contestation of, shared objects?

Hannah Arendt's famous essay, "The Jew as Pariah" offers four pariah figures as models of various kinds of para-politics that occur when people are deprived of access to public things. Using Arendt's essay as a template, these lectures will focus on three of her four pariah figures – Heine, Kafka's K., and Chaplin –each of whom is a kind of anti-hero, a remnant of a more heroic or meaningful life, or a witness to its impossibility, in modern times. Each invites further rumination on the Importance to democratic politics of public things.

Can democracy survive the neoliberal demand to privatize public things? This lecture will look at the idea of public things through the lens of D.W. Winnicott's object relations theory. Public things have transformative powers and the capacity to enchant citizenship. Certainly in the absence of public things, democratic citizenship can become disenchanted,  we will see, in dialogue with key thinkers such as Tocqueville, Hannah Arendt and Wittgenstein.

The second lecture focuses on the work of Hannah Arendt, and notes the subtle heretofore unrecognized appreciation, in her writings, of shared and public things to the experience of equal citizenship, especially among Jews and Arabs in Israel/ Palestine. Here the question is whether land can serve as a public thing that supports or subverts democratic life.

The third lecture continues the focus on land, focusing on first peoples' claims. I draw on Jonathan Lear's Radical Hope, in which a member of the Crow People, deprived of their traditional way of life by white liberalism (a prequel to our contemporary experience with the neoliberal) remarks: "I am living a life I do not understand." This lecture will explore what happens when ceaseless work becomes the norm,  and when people they go through the motions of life deprived of public things. Lars Von Trier's films – Melancholia – can be seen as a critique of neoliberal privatization and the worldlessness that results. The key theorists here are Jacques Ranciere and Hannah Arendt, whose Rahel Varnahgen may be said to prefigure the heroines of these of Von Trier's films.

Bonnie Honig is Sarah Rebecca Roland Professor of Political Science at Northwestern University and senior research professor at the American Bar Foundation in Chicago. She is the prize-winning author of Political Theory and the Displacement of Politics (Cornell UP, 1993), Democracy and the Foreigner (Princeton UP, 2001), Emergency Politics: Paradox, Law, Democracy (Princeton UP, 2009) and Antigone, Interrupted (Cambridge UP, 2013). She has edited or co-edited: Feminist Interpretations of Hannah Arendt (Penn State UP, 1995), Skepticism, Individuality and Freedom: The Reluctant Liberalism of Richard Flathman (Minnesota UP, 2002) and the Oxford Handbook of Political Thought (Oxford UP, 2006) and her work has been translated into Swedish, Spanish, Italian, French, Greek, and Japanese.