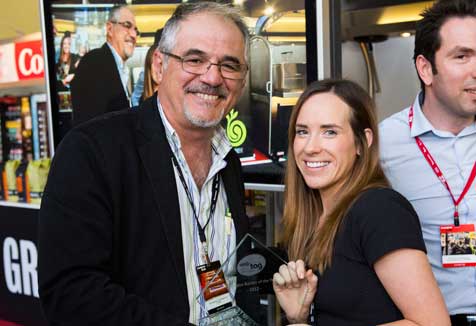 uwsconnect's Crystal Dempsey is presented with the TAG Campus Barista of the Year trophy.

Crystal Dempsey of uwsconnect (opens in a new window) successfully defended her title as the best barista of Australian universities at the finals of the 2012 TAG Campus Barista of the Year Competition, held in Adelaide recently.

Ms Dempsey, a Food and Beverage Operations Assistant on the Penrith Campus, progressed to the finals after excelling at internal heats, which were held across university campuses earlier in the year, and state rounds, which were contested at the end of August.

“It was great to make the finals for the second year in a row but it was also really nerve racking,” says Ms Dempsey.

The finals went for three hours during which time Ms Dempsey had to brew eight coffees in under 10 minutes to present to the expert judging panel, led by Peter Kotoulas of Grinders Coffee.

“The finals were a bit stressful but I managed to get a flow going and I felt my coffees were a lot better than last year,” says Ms Dempsey.

“There was a technical judge who watched my every move while making the coffees, and two sensory judges who tasted the coffees and judged by the cup.”

Ms Dempsey defended her title against top baristas from Flinders One, UQ Union and Arc@ UNSW, and received the TAG Campus Barista of the Year trophy and a $500 cash prize.

Ms Dempsey is responsible for training all uwsconnect baristas and teaches them her ‘secrets of the trade’, making sure that all staff and students at UWS can enjoy the best possible coffee.