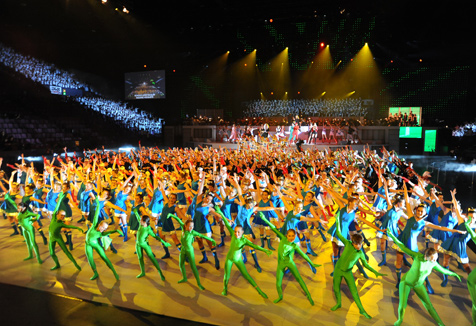 The Schools Spectacular is a brilliantly choreographed and costumed production that will feature more that 3,600 of the state's most talented singers, dancers and musicians from over 400 NSW public schools.

UWS, as the Major Sponsor of the Schools Spectacular, will again provide three of this year's performers with digital cameras so that they can each document and share the excitement and the colour, fun and drama of the popular variety show.

Stephanie Wall, Baden Hitchcock and Claudia Riley will record their activities in the lead-up to Schools Spectacular which will include interviews with other performers, video content of rehearsal performances and candid one-on-one discussion of each of the bloggers thoughts, feelings and experiences on their journey to the big performances.

The three bloggers were chosen from a pool of talented students for their outstanding commitment to the field of performing arts. Although they are still at school, each has already established a promising career:

Stephanie, Baden and Claudia will upload their content to their blog sites, which will be shared via the UWS Schools Spectacular Facebook page - hosted and moderated by the University.

Blogger Stephanie is looking forward to interviewing her fellow Schools Spectacular peers to include in her blog posts.

"I couldn't imagine not being part of Schools Spec. It's such a huge production and I think it's one of the biggest variety shows in the world."

"There is so much great talent and everyone is very professional and extremely friendly. I'm so excited that I have the opportunity to blog my experience and show others just what goes into the production."

Similarly, Claudia says her blog will be a good way of preserving her memories for years to come.

"I am very fortunate to be blogging my Schools Spectacular journey. I think it will be a lot of fun capturing memories that I can look back on – and so will all of my friends also performing."

"Blogging my experience will also be great for other students wanting to see in what's involved in the performance and get an understanding of the hard-work and commitment that goes into putting the show on.

The Schools Spectacular will be broadcast into the homes of millions of Australians on ABC1 in December.

The 2012 Schools Spectacular, 'Our Time' will feature at the Sydney Entertainment Centre for four shows only on Friday 23 and Saturday 24 November.