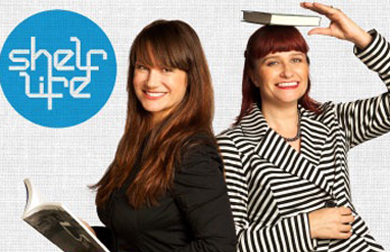 Hosted by writers and academics Dr Milissa Deitz and Dr Rachel Morley, from the University of Western Sydney, Shelf Life speaks with famous faces and everyday readers to discover this year's literary gems.

The third season of Shelf Life opens with the launch of the Sydney Writers' Festival, giving viewers an inside glimpse into this year's program and some tips on what to see and do.

Join Milissa and Rachel as they enter the homes of well-known Australians to see what's on their bookshelves, and to hear about the books they still hold close to their hearts.

Shelf Life also returns to Sydney's trains to find out what commuters are reading to pass the time, and the books that have shaped their lives.

Presenter Rachel Morley says one of the great joys of working on Shelf Life is exploring the Australian public's passionate relationship with books and storytelling.

“The community's interest in books is remarkably enduring, and despite persistent threats the book is certainly not dead,” she says.

“However there’s no doubt the presentation of stories is diversifying. Shelf Life looks at writers who have taken the word beyond the page to take in forms such as electronic literature, spoken word and visual poetry.”

“People are always asking me what I’m reading and what I’d recommend, and it’s getting harder for me to narrow it down, especially with our continued involvement in the Sydney Writer’s Festival and as an ambassador for the National Year of Reading,” she says.

“Still, having too many books to choose from is a fantastic problem to have!”

Shelf Life is repeated Wednesday 1.30pm and Saturday at 2.30pm.

Television Sydney broadcasts from the University of Western Sydney's Penrith campus, and is found on Digital Channel 44.

Dr Milissa Deitz is a former journalist turned academic who teaches media and communications at the University of Western Sydney. She is the author of three books and her research interests include participatory media; social media; surrogacy and parenthood; and the relationship between narrative and scholarship through the practice of differing genres of journalism.

Dr Rachel Morley is a lecturer at the University of Western Sydney. She has published essays in the fields of biography, autobiography, nineteenth-century literature, and women in sport. She has also worked in creative promotion and publicity, most recently on the National Young Writers' Festival. She is currently working on a biographical novel.