The inside story of ARTEXPRESS, screening on Television Sydney 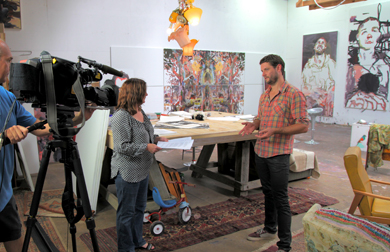 On Tuesday March 13 at 8.30pm Television Sydney will screen the first of a three part series examining the rise of one of Australia’s great artistic success stories, ARTEXPRESS – the annual exhibition for HSC students that tours across New South Wales and the world.

Narrated by former participant and Archibald Prize Winner Ben Quilty, the ARTEXPRESS series runs over three weeks and explores the history of the participants and the stories behind their creations.

Viewers will be given an inside tour of Mr Quilty’s studio and taken to New York to meet other former ARTEXPRESS entrants, including film producer Paul Riggio and photographer and artist Simone Douglas.

As the series discovers, many ex ARTEXPRESS participants have forged impressive careers, such as Ben Quilty.

“If you’d have told me I’d have won the Archibald prize when I was 17, I wouldn’t have believed you – as it is I’m still pinching myself,” he says.

From its humble beginnings as a fledgling exhibition moving around New South Wales on the back of newspaper delivery trucks, ARTEXPRESS has risen to become a highly professional exhibition delighting audiences around the world.

Every year thousands of enthusiasts flock to the ten ARTEXPRESS exhibitions in New South Wales, and this new series gives viewers the story behind the art, from the painstaking selection and curation process through to the scenic locations and touching experiences inspiring the students.

“ARTEXPRESS is a window into the adolescent mind,” says Mrs Bentley.

“The youth of today is not only embracing but shaping modern culture, and the strength of the crowds who line up to see their works is a testament to their creativity and skill.

“But not only is ARTEXPRESS a demonstration of the skills of our young creative minds, it’s also a tribute to the great teaching taking place all across the state.”

The works chosen for ARTEXPRESS are selected from nine and a half thousand Higher School Certificate submissions, with the NSW Department of Education and Communities selecting the shortlist of 500 works from ceramics, drawings, paintings, photography, sculptures and videos. Over its 30 year history ARTEXPRESS has attracted more than two million visitors to city and regional exhibitions in New South Wales. Television Sydney and the University of Western Sydney are sponsors of ARTEXPRESS.

The ARTEXPRESS series was produced by Rachel Bentley and Scott Richardson in association with Television Sydney, TVS Digital 44.