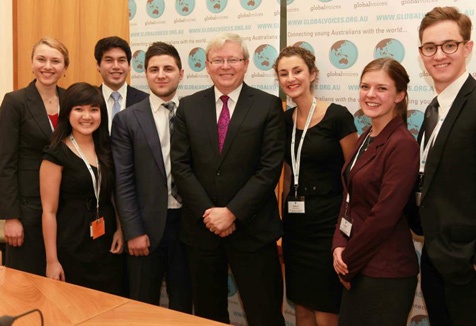 The topic of the forum was 'Is multilateralism in crisis?' and delegates discussed failures in multilateralism including the current gridlock of the 'Doha Round of Trade. Other topics included trade monitoring, administering existing trade rules and building trade capacity for developing countries.

Over seven days, Stevan got the opportunity to take part in panel discussions, meet delegates from around the world and he even had the honour of a private meeting with the WTO Director-General, Rufus H. Yerxa, and Australia's Ambassador and Permanent Representative to the WTO, His Excellency, Mr Tim Yeend.

Stevan, who is in his third year of the Bachelor of Business and Commerce (Advanced Business Leadership), says there wasn't just one highlight while at the forum - the whole experience was remarkable.

"I was inspired to be in the presence of forum panellists and participants who had immense knowledge and wealth of experience to share," says Stevan.

"It was intellectually stimulating and rewarding experience to take part in debates and discussions on various forum sub-topics."

In preparation for the forum, Stevan spent several months writing a research report that examined Australia's adherence to WTO principles.

"The removal of trade barriers and industry subsidies was recently a political hot-topic due to the decline of the PMV sector, job losses, plant closures, etc. The paper looked to answer whether adherence to WTO's vision of open trade has had an adverse effect on Australian people, business and economy."

Prior to the trip to Switzerland, there was a pre-delegation held in Canberra, where Stevan had the chance to meet many prominent Australian politicians including: Tony Abbott, Bob Carr, Julia Bishop and Kevin Rudd.

Global Voices is a non-profit organisation seeking to promote an understanding of and participation in international diplomacy by young Australians.