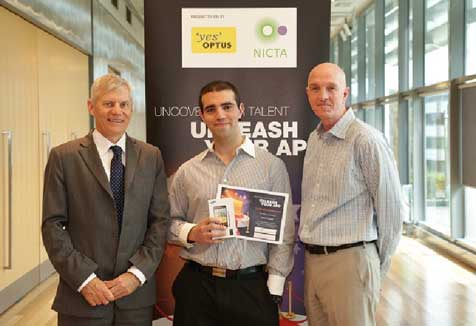 TripGo Sydney, a ‘green’ mobile app, has won first prize at the 2012 ‘Unleash Your App’ competition run by Optus and National ICT Australia (NICTA). The app gives users useful information about how to travel around Sydney and keeps track of their carbon footprint along the way.

“I travel around Sydney a lot and wanted to help other people find the most efficient and ‘greenest’ way to get around” says Daniel.

“App making has been a bit of a hobby of mine for a while – I like the capabilities that devices now have because you can do a lot of interesting things with them. I’d love to keep designing apps into the foreseeable future.”

TripGo Sydney encompasses a variety of transport methods including train, bus, car, ferry, motorbike, taxi and pushbike. It can track the carbon footprint generated by the journey, and can tailor journeys according to cost, duration, environmental impact and hassle.

As the first prize winner Daniel received $5,000 prize money, a Samsung Galaxy Note Smartphone, as well as a mentoring session and workshop at Optus.