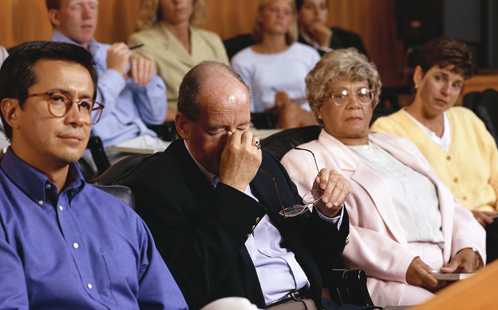 A study of courtrooms by a research team led by the University of Western Sydney has found the place where the accused sits could make a difference to the outcome of their case, with those sitting in a glass fronted dock twice as likely to be convicted as the same person sitting at the Bar table.

Sitting behind glass docks is more common in England & Wales, France, Canada and former Soviet-bloc countries, but from as early as 1914 American courts have found that any form of constraint undermines the right to a fair trial.

During the study, more than 400 mock jurors watched a 45-minute live trial about an alleged terrorist conspiracy, with actors playing the judge, counsel, witnesses and defendants.

Researchers then swapped the position of the accused for different "juries" to see if it had a bearing on their decision, with the accused either at the Bar table, in an open dock or in a glass dock.

"What surprised us was the size of the difference, and the way even ordinary docks make defendants look guilty."

In the study, 60 per cent of jurors who saw the accused in the glass dock returned a guilty verdict, compared to 46 in an open dock and 32 per cent at the Bar table.

A defendant sitting in the glass dock was also more likely to be considered 'dangerous' and 'threatening' than in the other locations.

These findings support the view taken by Supreme Court judges in Victoria in Benbrika and NSW in Baladjam that putting a defendant in a glass cage makes them look guilty.

"Situating a defendant in a dock is often justified by saying it's for the safety of the public or the defendant, but docks are not the answer," says Dr Tait.

"Security is an important concern, but it can be achieved without compromising the fairness of trials."

"Considering the strong evidence in this study, it's time we re-designed courtrooms to comply with human rights standards."