UWS research rated among the world’s best, according to national quality report

The University of Western Sydney's research has scored highly in the latest national report card, with over 70 per cent of the University's research at world standard or better. Three key UWS research areas – plant biology, forestry sciences, and complementary medicine – received ratings "well above world standard".
The Excellence in Research for Australia (ERA) 2012 Institution Report, released today by the Federal Minister for Tertiary Education, Skills, Science and Research, Senator the Hon Chris Evans, is a comprehensive assessment of the research quality at Australia's universities.  Carried out by the Australian Research Council it measures Australian universities' research against research carried out by other institutions around the world.
Research conducted by the University's Hawkesbury Institute for the Environment and the Centre for Complementary Medicine Research were considered to be world leading, receiving a score of five, "well above world standard" and the highest rating possible.
Other areas of UWS research which also scored very highly with ratings of four putting them "above world standard" were:   applied mathematics, macromolecular and materials chemistry, soil sciences, ecology, mechanical engineering, performing arts and creative writing, cultural studies, and literary studies.
UWS has shown impressive improvement in its research performance since the last ERA evaluation, which was carried out in 2010. The number of 'above world standard' ratings has more than doubled since the last report.
In complementary medicine, the ERA report found that UWS is a true global leader, and indeed, is the only Australian university to receive a rating in this discipline.
UWS Deputy Vice-Chancellor (Academic and Research), Professor Wayne McKenna, says the impressive results demonstrate the breadth and depth of the UWS research program.
"The ERA report confirms UWS's standing as a significant research leader in Australia," says Professor McKenna.
"It also affirms our strategy to concentrate our research strengths and make major investments in our researchers and facilities, which we have been doing for a number of years now.
"This builds on a wonderful year for UWS in terms of research outcomes. The University recently received its best ever result in terms of ARC Discovery research funding, making UWS now one of the highest performing research universities in the country – knocking on the door of the top 10 research performers in Australia.
"Overall, we are extremely proud of our Research Institutes and Research Centres that are making a real difference not only within the Greater Western Sydney region, but also on the national and international stage.  Congratulations to all our researchers and to all those who have helped contribute to this excellent outcome."

About the Hawkesbury Institute for the Environment

The UWS Hawkesbury Institute for the Environment is one of the world's most comprehensive climate change research facilities, and fills an important niche in the Australian research landscape.

The Institute's extensive facilities, on the UWS Hawkesbury campus, are dedicated to researching the impact of climate change on Australia's precious land resources - native forest ecosystems, managed forests and agricultural lands.
The unique facilities, among the largest and most complex in the world, allow scientists to create future climatic conditions, including elevated atmospheric carbon dioxide concentrations, higher temperatures and changed rainfall patterns.

The impact of the changes on the natural environment - from genes to entire terrestrial ecosystems - will be documented and used to help better predict the consequences of climate change and, importantly, provide insights on how humans can adapt.

About the Centre for Complementary Medicine Research

The research program of the UWS Centre for Complementary Medicine Research (CompleMED), based on the Campbelltown campus, focuses on the safety, efficacy and use of complementary medicine, and employs a diverse range of disciplines to investigate these issues.
CompleMED has established state-of-the-art clinical, analytical and pharmacology laboratory facilities to research how herbal medicines work on cellular, molecular and physiological levels, and to analyse and quantify the complex components contained in the medicines and their effect on our health.

The Centre's clinical research, investigating the effect of herbal medicines on a range of important health conditions, has been published in leading medical journals.

CompleMED has also played a key role in the development of national policies for practitioner regulation, and in the establishment of Australia's National Institute of Complementary Medicine which is also located on the UWS Campbelltown campus. 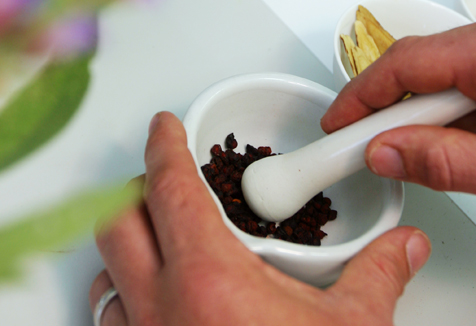 Herbal medicine is analysed in the CompleMED laboratory