Two world experts on Australian native freshwater turtles will be heading 'downstream' along the Murray next week to build local community partnerships to help save the animals.

Australian freshwater turtles, long considered a resilient resident of Australia's waterways are now at risk because of a confluence of events in the nation's biggest river.

Dr Ricky Spencer, from the School of Science and Health, says Australia has largely been immune to the global decline in freshwater turtles, even though over 40 percent of the world's species are threatened with extinction, making them among the most threatened groups of animals on the planet.

"Modern day turtles are our closest links to the dinosaurs, but their longevity masks a conservation crisis that may be in the same order of magnitude to that of their ancestors' rapid extinction," says Dr Spencer, who leads a team studying the decline of turtles in the Murray River.

"Now is the time to do something in Australia while their numbers are still relatively large."

Dr Spencer says turtles reproduce throughout their long lives but the average age of turtles in the Murray is growing older.

"We aren't seeing as many young turtles in the river as we used to. If a disease outbreak or environmental disaster strikes the old turtles the population will crash and it will be difficult for those left to rebuild the numbers," he says.

Dr Spencer is being accompanied on the road trip through Murray River towns in NSW, Victoria and South Australia by Professor Mike Thompson, from The University of Sydney's School of Biological Sciences.

Dr Spencer, Professor Thompson and colleagues have caught and released approximately 10,000 turtles in the Murray. The team includes researchers who have been catching turtles since the late 1960s, providing a large body of knowledge to draw on to help shape protection plans for the freshwater turtle.

Remarkably, Australian freshwater turtles have so far managed to resist the individual threats of disease, drought and predators.

"Fox predation on turtle nests has been over 95 percent since the 1980's but our research has shown that turtle populations are very resilient, absorbing these losses by living and breeding for up to 100 years," says Dr Spencer.

The problem now, according to Dr Spencer, has been the culmination of several factors affecting the Murray River over the last decade that are beginning to kill adults in large numbers.

"From Albury to Adelaide there have been some major changes to the Murray River.

"The severe drought in the region and changes to water management triggered major drying events and rising salinity levels, all of which have led to serious mass mortality events for the turtles.

"Freshwater turtles in the lower Murray are also dying from parasitic marine worm infestations because of high salinity levels.

"These large losses of breeding adults are a major threat," says Dr Spencer.

Dr Spencer and his UWS team are leading a consortium of researchers from The University of Sydney and the NSW Office of Heritage and Environment to investigate ways to halt the decline of turtles in the Murray River. The consortium is looking to expand and is seeking new partnerships along the Murray River.

"Given the widespread impacts of foxes and water management issues, the conservation of these important creatures will require a cross border approach. This program allows conservation and river management agencies from all states to come together and address a major problem that is likely to reach a crisis point in the near future."

"The turtles are the second largest vertebrate biomass in the Murray and occupy an important place in the river ecosystem and its long-term health. Significant decline, let alone extinction, would have unpredictable effects on the river's ecology," says Dr Spencer.

"We usually wait until a species is endangered before conservation agencies invest any resources into saving them. Often it is too late or too costly to do anything meaningful. Turtles in the Murray River may still be common numerically but they are all old individuals and unless we boost recruitment and stop adult mortality, they are all going to die out at the same time." 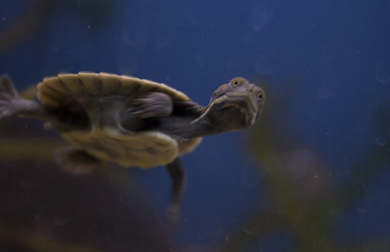