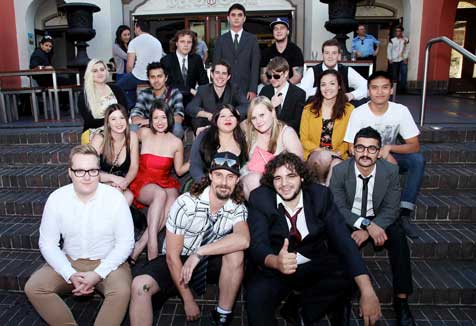 Bachelor of Communication (Media Arts Production) final year students gather outside of the Roxy Hotel ahead of the screening.

The student-run evening was held at the Roxy Hotel in Parramatta on Thursday 6 December and saw the budding filmmakers share their major projects in front of family, peers and members of the public.

“The aim of the event was to give ourselves the opportunity to showcase and share our final works,” says Anna.

“The evening was a great success because our friends and family came to watch the films and as film-makers, your aim and objective is for people to watch your movie.”

For the students involved, many of whom will now graduate and move into the industry, it was an exciting way to conclude their studies.

“The presence of friends who I haven't seen in a long time, and other film students and their family and friends all coming to support us made it a good way to celebrate the end of my degree,” says Anna.

“We all got to dress up and just enjoy ourselves, which helped to make it very special!”

By showing her thought-provoking film “Do you ever Wonder?”, Anna was hoping her audience would start to question their own lives by relating to the film. Anna’s film can be viewed here (opens in a new window).