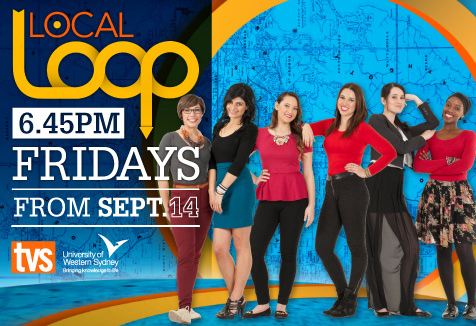 Television Sydney's popular community news and events show Local Loop is returning to give viewers all the information they need to get involved in community activities across Greater Sydney.

Airing on TVS, Digital 44 on Fridays 6:45 pm, the locally produced program is researched and presented by University of Western Sydney students.

Host Katrina Vo, a third year Journalism student at UWS, says there's something for everyone in Local Loop.

"The best thing is the little gems we uncover that you wouldn't normally hear about on radio or the newspapers, the amazing food festivals and charity events that are the lifeblood of communities across Sydney."

"Local Loop is the perfect place to discover new and interesting things to see and do during your spare time," she says.

Local Loop is written, produced and hosted by communication students from the University of Western Sydney under the guidance of the UWS Television Production Unit.

"It's such a great experience as a student because it's so involved and hands on, from writing the scripts to sitting at the desk and presenting the news items," Ms Vo says.

"It's invaluable studio television experience, and will hopefully put me on track to my dream of working as a presenter."

Returning on 14 September at 6:45pm on digital channel 44, Local Loop will once again be packed full of handy information and tips on how to make the most of your spare time by taking part in some great community activities in Sydney.

The community can contribute events to the team at Local Loop by emailing localloop@lists.uws.edu.au
Local Loop airs each Friday from 14 September at 6:45pm on Television Sydney, digital channel 44.