Building a bridge to uni: Thousands to benefit from new program 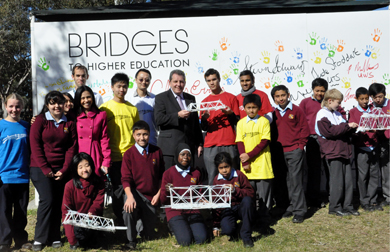 A bold $21 million initiative designed to reach over 100,000 school students and boost the participation rates in higher education from low socio-economic status communities, was unveiled today in Greater Western Sydney.

The Bridges to Higher Education project was launched by the Federal Minister for Tertiary Education, Skills, Science and Research, Senator the Hon. Chris Evans at Fairfield High School.

The four year project was initiated by five Sydney-based universities in a unique collaboration to create new aspiration-building programs and build on existing programs targeting school-age children and 175,000 parents.

This innovative project will work with primary and secondary schools and community partners in Greater Western Sydney to engage young people who previously might not have considered higher education as an option. More than 1.8 million people live in the region which has traditionally been under-represented in higher education participation rates. The Bridges to Higher Education project is a unique collaboration bringing together the collective resources and experience of the widening participation, equity and social inclusion programs at the University of Western Sydney, The University of Sydney, the University of Technology, Sydney, Macquarie University, and the Australian Catholic University.

The program will also draw on the existing partnerships the five universities have with significant education, government and non-government organisations including the NSW Department of Education and Communities, TAFE NSW, Universities Admissions Centre (UAC), AFL NSW/ACT, The Smith Family, and Tutoring Australasia.

“In order to achieve greater national productivity as well as build greater social equity, Australia must break down the barriers to lower representation in higher education of people with low SES backgrounds," said Senator Evans.

“We have invested an unprecedented $1 billion over the next four years to profoundly change the landscape of higher education in terms of inclusiveness, diversity and accessibility,” he said.

“The Australian Government is committed to building a stronger, fairer nation and more accessible higher education is integral to achieving our goal,” said Senator Evans. 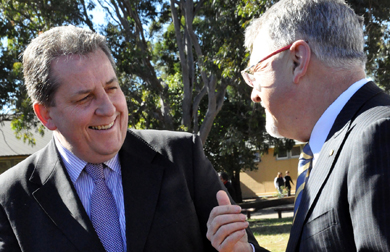 Using the combined resources of the universities and their partners the project aims to improve academic outcomes by improving student’s abilities in reading, writing and numeracy as well as in science, technology, engineering and mathematics.

Other programs such as visits to university campuses, summer schools, mentoring and work experience are designed to raise awareness and improve aspirations. The project will also work with teachers, careers advisors, community liaison officers and Aboriginal education officers, providing training and professional development.

The initiative will also develop new, innovative and integrated programs that draw on academic strengths of the respective partners, maximising the use of the virtual environment through activities such as virtual visits and connected classrooms, community TV programs, and other web-based and online initiatives.