The Boilerhouse Student Precinct at the University of Western Sydney's Parramatta campus has received a number of architectural accolades – in recognition of a design that is chic, functional, and respectful of the site's historical significance.

Back in 1813, the land on which the UWS Parramatta campus stands was home to an orphanage for the poor and destitute girls of the Colony of New South Wales.

By 1894, the elegant three-storey orphanage had become the Rydalmere Hospital for the Insane and a 'boiler house' – complete with coal-fired boilers and a towering brick chimney stack – was built on the grounds as an industrial laundry and heating facility.

Fast forward more than a century and the asylum has once again transformed into the University's historic Female Orphan School building. For many years, as lecture halls, auditoriums and libraries sprang up around it, the old boiler house lay in ruin.

That is until 2011, when the derelict sandstone brick building underwent its own transformation – into an innovative space where students can dine and socialise.

Alex Kibble of Tanner Architects was engaged to turn the boiler house into central plaza that acts as a major food service outlet; connects all of the student centred activities on campus; and, importantly, respects the unique heritage of the site.

After the industrial rubbish and rubble from the building was cleared, the construction team from Gledhill managed to retain much of the brickwork, including the towering brick chimney and the original coal-fired boilers. 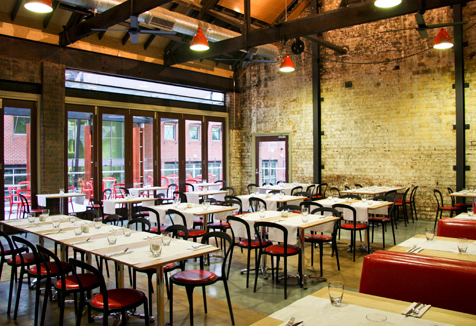 The boilers were taken away to Lithgow, where sculptor Philip Spark sandblasted and refashioned them, and were then returned to the Parramatta campus where they now stand at the front of the building on plinths. Other components such as gauges, auto stokers, ducts and steam valves, feature as decorative pieces inside.

The hardwood trusses and rafters of the building were replaced and a new timber floor, industrial kitchen, and lantern roof introduced. Outside, rectangular granite paved areas and washed concrete paths were made to link a pavilion-style outdoor seating area to a raised central grassed plinth.

The result is an industrial-chic Student Precinct where uwsconnect now operates an elegant restaurant, The Boilerhouse, which serves modern Asian and Australian cuisine, as well as an outdoor noodle bar suited for more informal dining.

The innovative design of the Precinct, which opened to students in August 2011, has received widespread recognition in a number of industry awards, including:

Anne Palmer from uwsconnect says the visual impact and ambiance of The Boilerhouse, coupled with its effectiveness in terms of functionality as a restaurant, has made it an obvious winner in so many competitions.

Alex Kibble, Managing Director at Tanner Kibble Denton Architects, says the transformation of The Boilerhouse is an exciting combination of old and new.

"The Parramatta campus of the University of Western Sydney is a significant and historic place. The project introduced a new physical presence: it is not historicist nor is it overtly contemporary; yet it makes a new statement of university life," says Mr Kibble.

For more information about The Boilerhouse, including its restaurant facilities, visit: http://www.boilerhouse.com.au