“Prime Minister, this is a good day. It is a very good day in so many ways.”

So proclaimed Professor Janice Reid, UWS Vice-Chancellor, following Prime Minister Julia Gillard’s announcement of $7 million in Federal funding to complete the restoration of the historic Female Orphan School, and establish a permanent home for the Whitlam Institute within the University of Western Sydney. 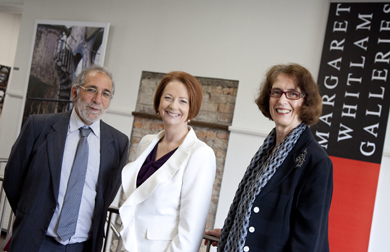 The generous funding will significantly contribute to the restoration of the interior of the Female Orphan School’s East Wing, which has stood empty and derelict since the mid-1980s; ultimately bringing the entire structure – the nation’s oldest three-storey brick building – back to its former glory.

In making the announcement at the UWS Parramatta campus, the Prime Minister also paid tribute to the late Mrs Margaret Whitlam, formally naming the existing gallery spaces within the Female Orphan School the ‘Margaret Whitlam Galleries’.

With its foundation stone laid in 1813, the building predates Hyde Park Barracks in Sydney and the Female Factory in Parramatta, and is one of the most important surviving buildings from the earlier period of European settlement.

The full restoration of the Female Orphan School will be completed in time for the building’s bicentenary in 2013, and in keeping with its historical roots, allows UWS to return this hidden national treasure back to the community as a public meeting place for educational and cultural pursuits.

The restored East Wing will become the permanent home for the Whitlam Institute within the University of Western Sydney, and the Whitlam Prime Ministerial Library – a collection that spans thousands of papers, books, letters and other important items belonging to former Prime Minister Gough Whitlam.

The refurbishment will also include new education spaces, galleries and exhibition areas, allowing the building to become an intellectual and cultural hub for Greater Western Sydney and beyond – a democratic space to celebrate Australia’s political and social history, and a community space for public seminars, conferences and forums, visits by schools and other community groups, art exhibitions and more. “This day has been a long time coming,” said Professor Janice Reid.

“The Female Orphan School is a building of national significance, and its restoration offers us a place for sharing our stories and forging new relationships; for speaking to each other in art and song and words; a place for study and debate and for the exploration of ideas.

“When the University of Western Sydney assumed responsibility for this site the Female Orphan School was abandoned and scheduled for demolition. We determined from the start that that could not be allowed to happen.

“It seemed inconceivable to us that a building of this significance if it were in the Rocks or Macquarie Street or Paddington would be left to rot. The fact that it was partially stripped for the restoration of the younger Hyde Park Barracks was a metaphorical slap on the face to the people of the West. Today that slur is righted.

“Today’s announcement is a matter of pride for the people of Western Sydney and an enduring gift to the nation.” Director of the Whitlam Institute, Mr Eric Sidoti, is equally delighted with the announcement.

“There could be no better place to establish a permanent home for the Whitlam Institute and the Whitlam Prime Ministerial Library than in this grand old building, within this young, vibrant university that straddles Gough’s old electorate and embodies so much of what he stood for,” said Mr Sidoti.

With the Prime Minister formally announcing the naming of the Margaret Whitlam Galleries, Professor Reid also noted: “How fitting it is that while Gough’s Prime Ministerial Library will be nestled in the building’s East Wing, the newly-named Margaret Whitlam Galleries will take pride of place in the West Wing. Margaret, who always provided the counterpoise, the wit and the warmth, the grace, earthy intellect and the style, ensuring that the statesman never consumed the man.”

View photos of the East Wing of the Female Orphan School, in its current condition