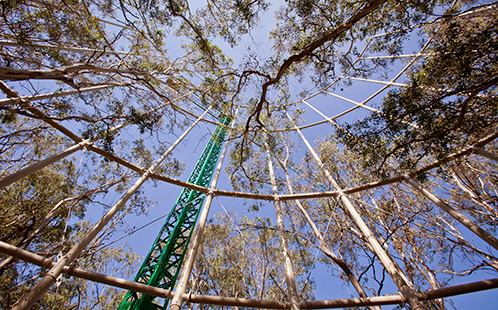 Australia's native forests will use water more efficiently in the future as the amount of carbon dioxide in the planet's atmosphere increases, according to new findings from Australia's largest climate change research experiment at Western Sydney University.

The boost in efficiency could help forests during drought and warm spells such as those associated with El Niño. Forests are Earth's biggest consumers of carbon dioxide – helping to balance increased output from industry, transport and other human activity.

Understanding how trees will react to future conditions is essential for predicting how the world's ecosystems and climate will change; and how much carbon forests will capture.

For the past three years, scientists at the University's Hawkesbury Institute for the Environment have been increasing carbon dioxide levels in tracts of native bush at the Eucalyptus Free Air Enrichment (EucFACE) experiment near Richmond, NSW.

The open air facility uses a complex of pipes and valves to precisely release carbon dioxide within a defined area of eucalypt forest to mimic the atmospheric CO2 concentrations predicted in 2050.

Professor Belinda Medlyn says the experiment is the first to test, on Australian native vegetation in the field, the effect of elevated CO2 on the workings of stomata - the pores on leaves which open and close to control a plant's exchange of gases and water.

She says the models they developed predicted plants would operate more efficiently under higher concentrations of CO2.

"In our experiment at the EucFACE facility we showed the models were accurate. The leaves were much more efficient – gaining 35 percent more carbon per unit of water lost - within the zone of the higher atmospheric carbon dioxide compared to trees just outside," says Professor Medlyn, from the Hawkesbury Institute for the Environment.

"This means that for every unit of water available, trees growing under elevated CO2 are able to capture much more CO2 out of the air.

"So under favourable conditions with plenty of moisture, our forests will be able to draw down more carbon from the air which is consistent with the prediction models that have been used to test our nation's capacity to offset carbon emission," says Professor Medlyn.

All the trees in the experiment experienced the same temperature, rainfall and other weather conditions. The only difference was the more efficient trees had access to more CO2 in the atmosphere.

Professor Medlyn says the field experiments will continue to run for the next 7 years at the EucFACE to more fully test the effects of changing conditions on the Australian bush. "This is an open air facility which means we can test under the naturally dry conditions of El Niño and the wet conditions of La Niña.

Tracking the changes under the variable conditions will help to strengthen reliability of our models."