About Our Region - Greater Western Sydney

Greater Western Sydney (GWS) is located in the western part of the Sydney metropolitan area, Australia, and is a growing region of economic opportunity, community aspiration and environmental diversity. The Greater Western Sydney region runs from Windsor in the north to Campbelltown in the south, and from Parramatta in the east to Penrith and the Blue Mountains in the west, comprising of 14 local government areas.

GWS is recognised as an area of growing national importance and has one of the fastest growing populations in Australia. As such it faces the distinctive sustainability challenges associated with a rapidly developing, culturally diverse, peri-urban region.

GWS is home to 2.5 million people - 35% of whom were born overseas. Its population is projected to reach 3 million by 2036 and to absorb two thirds of the population growth in the Sydney region - making the region one of the largest growing urban populations in Australia.

GWS residents come from more than 170 countries and speak over 100 different languages. The majority of new immigrants (60%) that come to Australia settle in GWS and over the past decade 50% of these arrivals were from Iraq and Sudan. Around 12% of GWS residents do not speak English well. GWS also has more Indigenous residents than South Australia or Victoria, making GWS the largest single Indigenous community in the country.

GWS has a high proportion of low income families who are dependent on childcare as both parents work. Staff shortages are a major issue for the region's early childhood centres. Overall the proportion of student completing year 12 or equivalent was lower in GWS (54.1%) compared to the Rest of Sydney (65.1%). In 2016 census twice as many people in GWS aged 15 or older had not attended school at all compared to the rest of Sydney and NSW. Further, 9.9% of 15 to 24 year olds in GWS were disengaged with employment and education, compared to 7.6% in Greater Sydney. The rate of engagement, particularly in the younger people, can be affected by access to strong employment and education markets and is a measure of socio-economic status and the level of welfare dependency in an area.

Western Sydney is the third largest economy in Australia behind the Sydney CBD and Melbourne, producing 31% of Sydney’s Gross Regional Product ($104 billion). The three largest industries in the region are health care and social assistance (11.6%), retail trade (10.2%) and construction (9.7%). The Western Sydney economy is expected increase, driven by projected higher population growth and a number of infrastructure and policy developments, notably the Western Sydney airport at Badgerys Creek, the Moorebank Intermodal Terminal and further development and expansion of the Western Sydney Employment Area.

GWS has higher than average unemployment and lower than average salary levels. The region also has high levels of mortgage stress as well as rental stress. The region is heavily car dependent with resulting impacts on air quality, health, quality of life and household budgets. Of those employed, 65.5% of workers live and work in GWS.

The region also features rural and agricultural lands, natural bushland and a range of recreational and sporting facilities. There are remnants of critically endangered native Cumberland Plain Bushland and World Heritage-listed areas of the Blue Mountains. The Hawkesbury-Nepean River system is Sydney's primary water source and the backbone of the region's agricultural and fishing industries. It is also a major recreational attraction for residents of GWS. The demand for land development and increasing population is threatening not only the natural bushland but the local food industry. 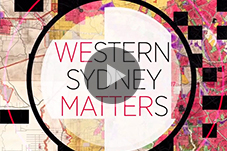 Find out more about why Western Sydney Matters.