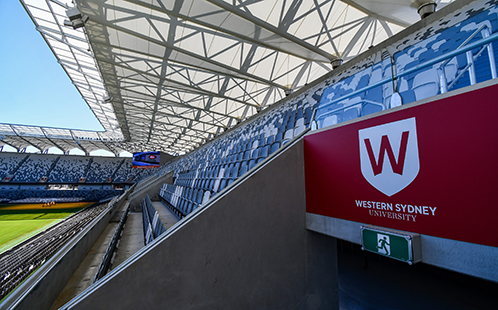 The partnership brings together two organisations dedicated to making a positive impact on the communities of Western Sydney and beyond.

Bankwest Stadium CEO Daryl Kerry said today: “Bankwest Stadium is committed to supporting the wellbeing and education of all Australians, and as a thriving hub of community activity, the Stadium understands and embraces the opportunity it has to make a positive difference in this area.

“We are proud to partner with Western Sydney University, whose Parramatta City campus and Parramatta South campus are just down the road from the Stadium, and we look forward to sharing our passion for NSW and the Western Sydney region with them.”

“The five-year partnership will provide a wealth of educational and practical opportunities for Western Sydney University students and staff to engage with a world-class sporting facility,” said Professor Glover.

“Bankwest Stadium is an exciting new sporting and entertainment hub for the Greater Western Sydney community to enjoy.”

The 30,000-seat Bankwest Stadium opened its doors to the public with a Community Open Day on Sunday 14 April and has already hosted blockbuster sporting events and a series of business, community and cultural events.

More than 30 sport and entertainment events are already confirmed for the Stadium, with more to be announced.

The Stadium will host hundreds of additional meetings, functions and community events, with more than 600,000 people expected through the gates in its first nine months of operation.