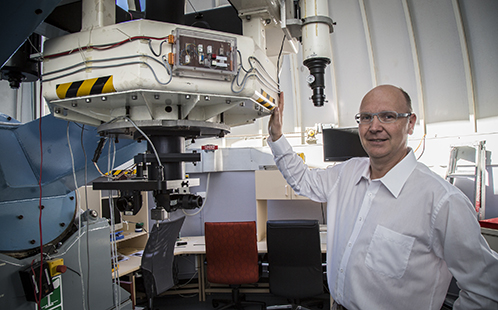 Flying on board a NASA aircraft is the dream of every scientist and astronomer. Now, it will be a reality for Western Sydney University’s Professor Miroslav Filipovic.

Professor Filipovic, from the School of Computing, Engineering and Mathematics, will be the second Australian scientist in history to fly on NASA’s specially redesigned Boing 747 airborne observatory.

The aircraft is named SOFIA which stands for Stratospheric Observatory for Infrared Astronomy and carries a 2.7 metre telescope. SOFIA is the largest airborne observatory in the world, capable of making observations that are impossible for even the largest and highest ground-based telescopes.

Professor Filipovic has reserved seating in the cockpit as a guest scientist and will sit amongst NASA’s mission crew of pilots and telescope operators.

Only 5 to 10 percent of proposals for a seat on SOFIA are accepted for this expedition and once accepted, researchers must satisfy several other NASA requirements including a good health check.

From 44,000 feet, he will be examining one of the brightest known remnants of the supernova explosion, which still holds the bulk of its highest energy cosmic-ray particles. This research will be conducted in collaboration with the University of Adelaide, University of Cologne and University of Nagoya.

The team of researchers plan to map several parts of the celestial object rim while aboard SOFIA. This will allow them to look for variations in ionised carbon (C+) across the Supernova remnant bubble. “The high cosmic-ray density inside the supernova remnant bubble, about 4000 times higher than the Galactic average, could lead to significantly enhanced ionised carbon abundance though ionisation of the neutral gas,” Professor Filipovic says.

By tracking this, the team will be able to create a record of the total molecular column so far, which means they can quantify the level of cosmic-ray acceleration occurring in the supernova remnant.

This will help in advancing the understanding of where Galactic cosmic-rays come from – one of the most intriguing questions of modern science.

In addition, the study will provide new opportunities to follow the chemical production channels for ionised carbon, and its dynamics in a region under the influence of a 1000-year-old supernova remnant that can travel more than 1000 km per second.

“Not every astronomer and scientist can fly on SOFIA,” Professor Filipovic says.

“The research project needs to be approved by a very rigorous peer referring process. This is not only an honour for any scientist-astronomer, but a life-long dream."