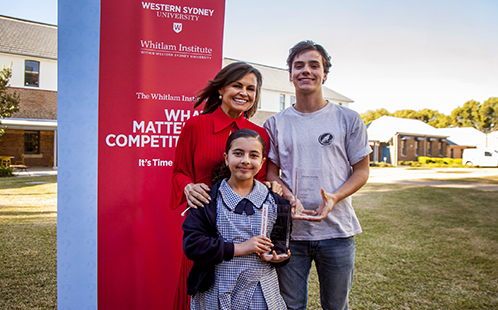 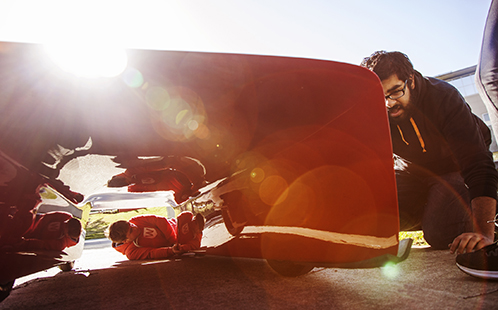 The Whitlam Institute (opens in a new window) and new Patron Lisa Wilkinson AM are delighted to announce for the first time joint overall winners for the 2017 What Matters? writing competition -  Matti Schwarz of Tasmania and Anhaar Kareem of New South Wales. This year's competition attracted over 4000 entries from three states and territories.

Lisa Wilkinson said, 'When I joined What Matters? as Patron earlier this year, I had always been confident that young people are interested in the big ideas. I was not disappointed. The writing more than lived up to my expectations, but these skilfully written essays were not an easy read.'

'They hold up a mirror to our society, and the reflection contains concern for human rights, a strong sense of identity, and of injustice. The essays bestowed on me a sense of the fundamental responsibility of adults to pass on a positive legacy.'

Director of the Whitlam Institute Eric Sidoti said 'What Matters? offers a window into the lives of young Australians: not just what concerns them but what inspires them. For more than 10 years now we have been reminded how passionate, observant and articulate young people are, and how deeply driven they are by a sense of social justice.'

This is the first year that the judging panel, comprised of various volunteers from the worlds of education and publishing, were unable to award a single winning prize.

Matt Schwarz's essay is titled 'Simple Things' but the issues addressed are anything but. He writes, 'The children of the future need to grow up and grow old in places like this; they need the ocean and the air to remain clean, they need the forests to camp in and mountains to climb. And I want us to give them more. I want these children to experience freedoms that we can never know.'

Anhaar Kareem's essay is titled 'My Dreams Matter' and she writes in poetic prose about the refugee experience, discrimination, and the importance of goals. She ponders the challenges of those from minority groups who dream of a role in public life, and says 'Everyone's dreams matter.'

For all media enquiries or to view the professional photographs of the event, please contact the Communications Manager at the Whitlam Institute, Lyndal Howisn on 0404 854 033.

The Whitlam Institute within Western Sydney University at Parramatta commemorates the life and work of Gough Whitlam and pursues the causes he championed. The Institute bridges the historical legacy of Gough Whitlam's years in public life and the contemporary relevance of the Whitlam Program to public discourse and policy. The Institute exists for all Australians who care about what matters in a fair Australia and aims to improve the quality of life for all Australians.

The Institute is custodian of the Whitlam Prime Ministerial Collection housing selected books and papers donated by Mr Whitlam and providing on-line access to papers held both at the Institute and in the National Archives. The other key area of activity, the Whitlam Institute Program, includes a range of policy development and research projects, public education activities and special events. Through this work the Institute strives to be a leading national centre for public policy development and debate.

For more information, visit the Whitlam Institute website.(opens in a new window)

Lisa began her career working for the magazine Dolly when, at age 21, she became the youngest editor of the magazine and after four years she was appointed editor of the magazine Cleo and went on to become International Editor-in-Chief. Her television career began in the 1990s when she was a regular panellist on Network Ten and Foxtel's Beauty and the Beast. During the 2000 Summer Olympics, Lisa co-hosted The Morning Shift on the Seven Network. In 2005, she began hosting Weekend Sunrise on the Seven Network and in 2007, it was confirmed that Wilkinson was to co-host Today on the Nine Network.

A Member of the Order of Australia since 2016, Lisa was recognised in the Honours List for her "significant service to the print and broadcast media as a journalist and presenter and to a range of youth and women's health groups."