The way your children watch YouTube is not that surprising – but it is a concern. Here are some tips 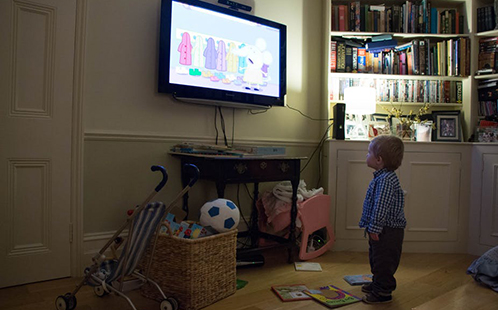 Clips of Peppa Pig on YouTube aren’t always what you expect them to be. mellowynk/flickr, CC BY-NC-ND

The following article by co-authored by Joanne Orlando from the School of Education was first published with full links and videos in The Conversation.(Opens in a new Window)

Imagine a 3 year old in front of a screen watching Peppa Pig (their favourite TV character) hanging by a noose - the victim of a lynch mob. As the video continues the child sees Peppa explicitly swearing, violently stabbing her brother; and then Peppa’s family acting out a sex scene inspired by 50 Shades of Grey.

Parody and unauthorised online children’s content is an issue writer James Bridle brought attention to recently with his article Something is wrong on the internet.

My audit of these videos shows that in an odd way they actually resonate with a young child’s level of development. This helps us to understand why they get so many views.

However the inappropriate and unsafe messages they communicate to children has worrying implications. Being aware and taking a few key steps can help minimise these experiences in your household.

What children are viewing

Young children have rapidly become prolific users of the internet, including watching online videos. While many of the videos are suitable, others use unscrupulous gimmicky methods to profit from a young and impressionable audience.

My experience is that these videos fall into three categories.

Why kids watch these videos

The way that children engage with the questionable online videos can be perplexing, and worrying, for parents.

However, when put in the context of what we know about key behavioural characteristics of children as they develop, it’s not that surprising.

The videos often feature something that children are really interested in - toys, playing, and/or popular characters they know. If a child is a fan of the characters, or even owns some of the toys depicted in the video, the connection will be even stronger.

Many of the videos portray odd events. From a child development perspective, things that are unexpected – like an adult wearing a nappy, or their favourite wholesome character being evil – are a great source of humour for young children.

Many of these videos centre on taking a new present or toy out of a box. As any kid on Christmas morning will tell you, guessing what’s inside the wrapping is half the fun. It will also likely conjure up happy memories for the children of receiving a present themselves.

Some of the videos feature child presenters – children enjoy watching their peers on the screen, and they get pleasure from watching others open presents. The problem is that it can also fuel an incredible desire and anticipation for these particular toys or products.

Shady knock-offs, and no filters

Regardless of their amusing appeal to kids, children are seeing video content not produced by reputable content producers. Instead, they are knock-offs created by anonymous users with names such as Brick Man and Melon Troll. These channels game internet search algorithms to automatically play their video as soon as the last clip the child is watching finishes.

Even though a child may be on a video sharing platform for kids, this does not mean that all inappropriate content will be effectively filtered out. For example, a child might search “Peppa Pig” and whatever videos are titled or tagged with “Peppa Pig” appear on their search list. Based on the original search, more suggested videos then appear. Parents state that it is in the suggested videos that the worrying content often appears.

Online videos are a lucrative business, and to capitalise on this process, the algorithms are now informing what is produced. Hashtags and keywords now play a big part in the video content.

Recent research shows that as a result, children are increasingly exposed to videos containing advertising and disturbing images that are indistinguishable from regular programming.

A layer of ethics

An algorithmic approach removes a layer of ethics that is included when humans make decisions in production of content.

YouTube Kids is a very popular site on which kids watch these videos, and owner Google has pledged to improve its algorithms. Google states that amongst other changes, in the last week it terminated more than 50 channels and has removed thousands of videos under their newly revised Community Guidelines.

Another issue that must be addressed is allowing the option to turn off suggested videos automatically playing.

What parents can do

More than 300 hours of content are uploaded to YouTube every minute, which makes this issue difficult to manage. Amendments from Google will likely take a while.

It is therefore important parents use strategies to protect their family. Five steps parents can do right now are:

The online world is in a constant state of innovation, but it can be a positive part of life if we watch changes that occur, understand the effects on users and address concerns.