For cities, hosting major sporting events is a double-edged sword

The following opinion piece by Professor David Rowe, from the Institute of Culture and Society at Western Sydney University, was first published

Just as the publicity machine is cranking up for the 2018 Commonwealth Games on the Gold Coast, new Australia-based bids have already been signalled to host the same event in the future.

Shepparton is leading a bid by 11 regional Victoria cities and towns for the 2030 Commonwealth Games. And western Sydney is interested in hosting the event in either 2026 or 2030.

Nobody in Australia seems to have been deterred from bidding by Durban losing the rights to hold the 2022 Commonwealth Games because the South African city could not afford it. Adelaide, Melbourne, Perth, Sydney, and even a Gold Coast reprise have been mooted as replacements.

Meanwhile, a 2017 V8 Supercars Championship event is controversially to be held for the first time amid the heritage streets and green foreshore spaces of Newcastle East this November.

Despite the event's under-performance at – and subsequent departure from – Sydney's Olympic Park, Newcastle City Council, the New South Wales state government and Destination NSW have been happy to wave it through with minimal consultation and attention to due process.

But what is the appeal of hosting big sporting events and does the economic equation stack up?

In a world where place-marketing is seen as essential to the success of urban centres large and small, grabbing attention is imperative.

Sports stars and brands attract people to watch contests close up. But, even more importantly, they attract the media. So, investing in staging sport is ultimately a matter of turning the entire host environment into a stage.

This can be called the showcase justification, which conceives the sport as less intrinsically important than its picturesque location. This is why TV establishment shots always focus on key landmarks like Cape Town's Table Mountain during the 2010 football World Cup, London's Big Ben at the 2012 Olympics, and Rio de Janeiro's Christ the Redeemer statue at the 2014 FIFA World Cup and 2016 Olympics.

For Gold Coast 2018, it will be the Surfers Paradise skyline. 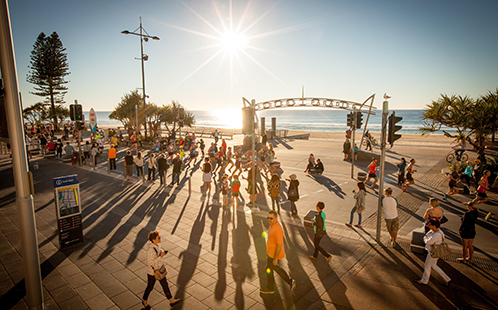 Although attracting sport tourists to the event is the immediate aim, it is intended to lodge appealing imagery of place to a wider audience for a much longer period.

Like Barcelona after its 1992 Olympics, a buzz can be created about a city that has little to do with sport. General tourist and convention traffic may be drawn to the place, along with companies looking to relocate to smart places where their employees would like to live.

Where place recognition and appeal are not immediately obvious, some marketing hyperbole is needed. For example, in justifying why the V8 Supercars should zoom through inner Newcastle, the street circuit is presented, in reference to the Formula One Grand Prix, as "the Monaco of the southern hemisphere".

Such attempts to take sport away from dedicated stadiums in often-isolated locations to the heart of the city are integral to the idea of selling the space rather than the sport. Inevitably, though, it results in additional cost and community disruption.

This objection is frequently met with the urban redevelopment justification. In its pre-Games makeover, Barcelona spent millions of dollars and sacrificed many old streets, vineyards and gardens to turn itself into an Olympic city.

The same occurred to different degrees with the Athens, Beijing, London and Rio Olympics. And the Manchester 2002 Commonwealth Games stimulated an estimated £2 billion in public and private investment in the city's east over 15 years.

Because hosting sport means tight, immovable deadlines, work in and outside the stadium has to be completed much faster than usual for sizeable building projects. The result can be a thoroughly unpleasant experience for affected communities, including forced and permanent displacement, corrupt and unethical conduct by government and business, and shoddy work requiring subsequent rectification.

Worse still, overly optimistic and unreliable financial projections mean the promised economic bonanza is often a long, painful event hangover. As both Athens and Rio have discovered, urban debt and decay quickly become the real legacy of the exhilarating moment of playing host to big sport.

The International Olympic Committee's demand for prestige venues that can quickly become white elephants has caused a sharp decline in host city bids. As a result, there is increased emphasis on recycling existing sport infrastructure in affluent cities like Tokyo, Paris, Los Angeles and Sydney that have previously hosted the event.

If the economic arguments for playing host still look shaky, there can always be a resort to the participation stimulation justification.

This is the familiar idea that sport watchers will be inspired to be sport players through exposure to big events. The problem is, hosting sport events rarely leads to sustained higher levels of participation. And, in cases such as motor sports, mass participation is neither feasible nor desirable.

When all else fails, the "sleeper awakes" justification can be deployed against those who oppose or are sceptical about the event by portraying them as whingers, NIMBYs, party-poopers, and – in the go-to insult of the Trump/Brexit era of political populism – elitists.

This championing of hosting events is partially dependent on sporting taste. But if that doesn't convince, it can rely on the tried-and-tested unforgettable party justification. As with other great parties, those who enjoy them most tend to forget the stomach-churning clean-up afterwards.

In 2015, Australia hosted the men's cricket World Cup and football Asian Cup, as well as the netball World Cup. This was a particularly busy year, but recent developments indicate that its state and territory capitals, provincial cities and regions are now continually on the hunt for a large or medium-sized sporting event to host.

In other parts of the world, potential hosts including Berlin, Boston, Cardiff, Edmonton, Hamburg, Rome and Singapore have withdrawn bids for the Olympic or Commonwealth Games.

This is not an argument against hosting big sport events. But it does advocate looking closely at the hyperbole, concealed self-interest, confected populism and voodoo economics that try to submerge the enduring question: "cui bono" (who benefits)?