A message from the west: Dear Sydney, we're heading for a messy break-up

The following opinion piece by Dr Andy Marks, assistant vice-chancellor at Western Sydney University, was published (opens in a new window) in the Sydney Morning Herald. 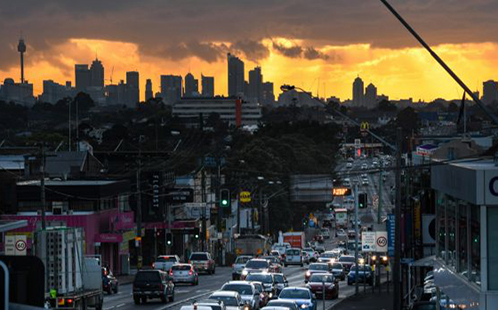 Transport for NSW says it is urgently striving to "meet customer demand".  "We need to do something now," is the plea on its website. Its latest solution? New timetables, to be unleashed this Sunday.

Trouble is, it's far from clear that this is what customers on the busiest public transport routes are demanding.

Same goes for WestConnex. The official line is the project will "make life easier" by providing "vital" access east. Thank goodness. Life is tough enough without being marooned in the burbs, denied access to Barangaroo's empty shopfronts.

And, this week, the steak knives were thrown in with a promise of "free rego for frequent Sydney toll road users". Government is determined to get us into "town". Hang the expense.

For those of us who live in western Sydney, who contend daily with average rail passenger loads of up to 141 per cent, and, on a good day, road commutes of around 90 minutes, the subtext is clear: you're cut off, disconnected and adrift, but don't worry we're throwing you a lifeline. Just sit tight and we'll get you out.

Thanks but, um, how do we say this?

Sydney, it's not you, it's us. Western Sydney has moved on, albeit slowly due to repeated trackwork delays. And, sorry, but tinkering with timetables won't cut it. The thrill has gone, last seen idling somewhere between Clyde and Strathfield stations.

We're tired. Two hundred thousand western Sydney residents are compelled to journey eastward into Sydney every weekday for work; decent paying, globally connected and fulfilling work. We're over it.  Making the ride east "easier" isn't the issue. The ride is the problem.

We want to get off. We want to spend less time on the road or huddled in disquiet on the "quiet carriage".

Not even the promised 300 extra train services into the CBD on the T1 and T2 lines will change our mind. Although it is a grand gesture, it's just too late and, we hate to say it, more of the same; more connections to jobs that disconnect us from our communities, our homes, our families.

Still, when you ask us whether your dazzling new timetables or infrastructure plans fit you, we respond flatly, "Sure, Sydney, they look great."

We go through the motions. We've done it for so long. Like when an August 2016 poll commissioned by Fairfax Media asked 1600 NSW voters, "Do you think WestConnex will be good for Sydney?" Offered no alternative proposition, almost 48 per cent responded, "Yes." Notably, around 40 per cent were "undecided".

Ask them whether they'd prefer to work closer to home, or not forgo untold hours of their lives each week stranded in traffic or crammed in a fragrant carriage. Nobody would oscillate.

Instead, we get what's "good for Sydney", even when what's good begins in the west.

The lion's share of investment in new transport infrastructure across western Sydney – $16.8 billion in WestConnex alone – winds its way back east via new or "improved" connections to inner Sydney and surrounds. The newly released NSW government Future Transport strategy makes no firm commitment of scale to change that. None.

But all is not lost. With its recent "Three Cities" plan, the Greater Sydney Commission proposes a progressive reorientation of the metropolitan area. As an exercise in rebalancing the region's spatial geometry, it is admirable.

Similarly, the plan's focus on "jobs, services, cycling and walking paths and quality public spaces" and "housing affordability" is refreshing and very necessary. But without large-scale increases in quality jobs in western Sydney, bike paths and village squares won't matter. Who will have the time to use them?

Put simply, there are insufficient jobs – and not nearly enough good jobs – in western Sydney to meet current or future population levels.

We need a jobs solution. We need our lives back. Not a new timetable.

SGS Economics and Planning's analysis of the latest census data shows no sign of any meaningful shift in jobs generation for western Sydney.

Sure, we're all hurting now, but we can fix this, right? Give it one last try?

The airport at Badgerys Creek will give western Sydney a substantial jobs boost. And with targeted investment, industry incentives and continued government support it could even can fulfil the wildest ambitions of aerotropolis advocates. For that to occur, a commitment to a north-south rail connection is a must, and not when the first plane lands in nine years' time. Now.

But honestly, if we are going to salvage this relationship, it will take more than an airport, as critical as it is. Out here we've had plenty of time, mostly stuck in traffic on the M4 or Woodville Road, to think about what the bigger solution might look like.

The most economically substantial and rapidly growing cities in the country need better connections. Only this week, an additional land release of 30,000 dwellings was announced for the newly minted suburb of South West Creek.

With the right connections, Blacktown, Campbelltown, Liverpool and Penrith can be the sites of a transformation in the way we relate to "Greater Sydney", not just as an east-west proposition but a complete package.

It's not too late to change, Sydney. The new angle would really suit you, and would go a long way towards recapturing the magic. Plus, we'd have even more thrilling new timetables to bond over.