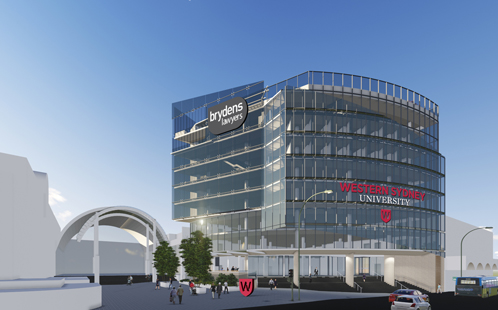 Western Sydney University has unveiled plans for its new Higher Education Centre at Liverpool – a move that will significantly expand higher education opportunities for residents, help transform the city's knowledge economy and drive business development in the region.

Following last year's announcement that it would establish a site within the Liverpool CBD, the University has revealed further details about the wide range of programs to be taught at the Higher Education Centre, which will open in 2017 in a purpose-built facility based in Macquarie Street.

As well as providing a suite of undergraduate and postgraduate courses in the areas of business, information technology and health, the University will also offer its highly successful pathways College – one of the leading pathways programs in Australia.

The College will provide a range of diploma programs to students at Liverpool, which importantly, after successful completion, gives them direct entry to the second-year of a Western Sydney University degree.

Students from the Liverpool area make up a large part of Western Sydney University's 44,000-strong student population, with over 4,000 Liverpool residents already studying at one of the University's campuses.

The new 3,000sqm Higher Education Centre will be a high-quality, modern, technology-rich and highly-flexible space, and will also include the University's Launch Pad smart business centre, which brings together government, corporate and University expertise and provides mentorship to start-ups and early stage businesses.

Vice-Chancellor Professor Barney Glover says with approximately 1,000 students expected at the Higher Education Centre, the University is proud to make such a major investment and a long-term commitment to the city – ensuring that the people of Liverpool finally have their very own site where they can study close to home.

"Establishing a Higher Education Centre at Liverpool has always been a pivotal part of Western Sydney University's strategy to open up higher education opportunities for people across Greater Western Sydney," says Professor Glover.

"We have a long standing connection with Liverpool, with well established education and research links with the local hospital and the Ingham Institute, so developing a brand new site in Liverpool city is a natural extension for us.

"By creating a Higher Education Centre in the heart of Liverpool we are meeting the higher education and employment needs of a young and growing city, where almost half the population is under 30 years of age."

Students will benefit from having full access to the Western Sydney University campus network and all on-campus facilities, with the nearby Bankstown campus located in Milperra just a few kilometres away.

Professor Glover says embedding the University's Launch Pad Centre within the site is an exciting initiative that adds another important dimension – helping to drive business development and foster an entrepreneurial culture across the city.

It will also provide students with a contemporary and innovative learning environment, where they can hone their skills in problem solving and creative thinking, which are core to the knowledge economy and the Federal Government's innovation agenda.

Launch Pad brings with it a partner network of supporting organisations including NAB, KPMG, NSW Department of Industry, CSIRO and L&T Infotech.

"Launch Pad is about helping local businesses transform their ideas into products for the market," Professor Glover says.

"By providing targeted support to local start-ups, linking them with university researchers and corporate partners, we will be helping to drive economic development across the region and assist local businesses with making the leap from great idea to commercial reality."