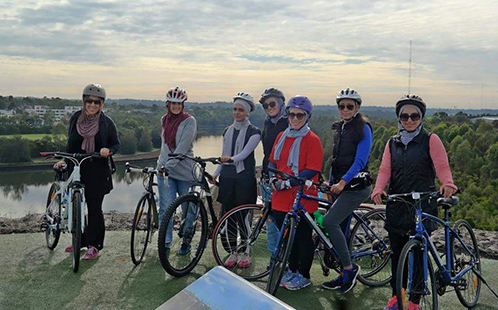 Using a bicycle to break down cultural barriers and stereotypes may seem to be an unusual approach but University of Western Sydney Occupational Therapy student Cindy Rahal has turned a small research project into a community success story.

In 2014, Cindy decided to examine the issue of Islamophobia and its effect on Muslim women as they go about their day-to-day activities.

She says she was aware that Muslim women increasingly had to curtail or modify their activities in light of the growing number of harassment incidents and attacks.

"In the interviews I conducted, so many women said they were now reluctant to be 'out and about' unescorted by male relatives. The three words I kept hearing were 'just in case'," she says.

"Obviously it's very frustrating for them and it's having an impact on their mental health."

To investigate her topic and also offer an alternative to Muslim women who were worried about exercising alone, Cindy decided on a novel approach. She set up a cycling group so Muslim women – and women in general – could get together and feel safe and supported while undertaking leisure activities such as cycling.

To gauge interest she created a Facebook page initially calling it Sydney Muslim Sisters Cyclists. With 310 "likes" it soon became clear that all kinds of women were interested in the idea and it quickly evolved into an opportunity to encourage social integration for all women. Given its broader appeal, Cindy has since renamed the group Sydney Cycling Sisters.

The first ride attracted just four girls who then became the group's organising team. They then launched their first official ride on May 16 which attracted 21 participants. The numbers have continued to grow since then. The 20-kilometre weekly rides have been taking place at Bicentennial Park in Homebush so women, who are interested but don't have a bike are able to hire one at the park.

Cindy says she has high hopes the group will continue to grow and looks forward to getting the group involved in other cycling events.

They have also added a monthly shorter ride for women with children who may not be able to attend the regular rides.

With so much interest, the Sydney Cycling Sisters are now venturing further afield and will enter a team who will cycle 58-kilometre one way in the Sydney to the Gong community bike ride.