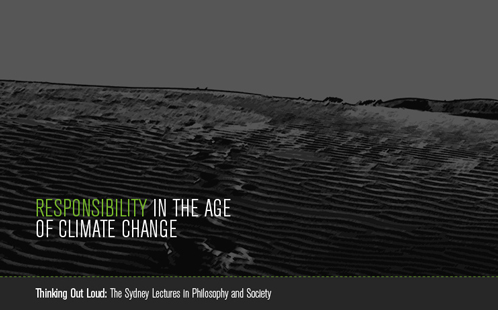 An apocalyptic Hollywood movie? Not according to leading environmental philosopher David Wood, who sees it as a not implausible prospect. We need to think the impossible to avoid the unthinkable.

Professor Wood is emblematic of new wave philosophers who tackle the Anthropocene, the geological era when human activities have a significant global impact on the Earth's ecosystems.

For Professor Wood, the announcement of this new geological epoch is not just a neutral scientific classification. It marks a radical transformation in the background conditions of life on earth – and not just human life.

In his upcoming Thinking Out Loud - Sydney Lectures, Professor Wood lays it out clearly: we are responsible for the Anthropocene.

"This change is one for which "we" are responsible (though we never intended it), and is likely catastrophic," he says.

What is to be done?

Professor Wood argues that we need to devise supplementary economies, and alternatives to unsustainable profit-taking. But that can't be done without changing our underlying habits, values, and desires. Even at the eleventh hour:

"If global warming marks a crisis for life on earth, it is also a real opportunity. For our survival (alongside the non-humans on the planet) requires a strong new commitment to social justice," he says.

In his far-reaching lectures, Professor Wood draws on the work of a wide array of philosophers and the science of climate change to make a lucidly rational plea for us to 'think geologically' so as to motivate a change of direction. He quotes Che Guevara: "Be realistic: demand the impossible".

For Professor Wood theory must meet practice. His own response to an overheated society has been to reclaim the idea of a local life, sustainably lived. His blogspot chronicles the rhythms of life closer to nature.

David Wood is W. Alton Jones Professor of Philosophy at Vanderbilt University. He has taught philosophy in England and the United States for over thirty years, and he has written 16 books.

Thinking Out Loud: The Sydney Lectures in Philosophy and Society aims to bring leading international thinkers to Australia to examine major issues and ideas of our time through a philosophical lens. The Lectures are a collaboration between UWS, Fordham University Press, State Library of NSW, and ABC RN.