UWS marks 25 years with a free fair and concert 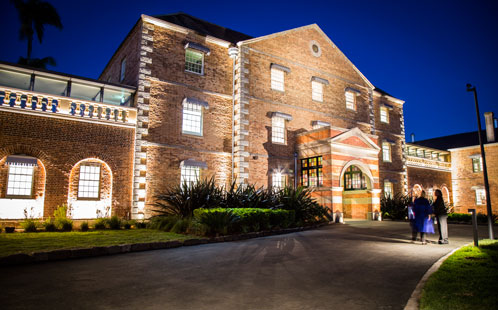 It will be entertainment, fun and celebration for the whole family as the University of Western Sydney’s Parramatta campus hosts an autumn fair and free concert produced by one of Australia’s most respected theatre directors, Wayne Harrison AM, on Saturday 29 March.

Members of the community are invited to join in the festivities with UWS to mark the University’s 25th anniversary celebrations.

From 11am until 3pm, the Parramatta campus will come alive with a host of activities, including jumping castles, carnival games, live music, photo booths, and cute and furry animals to hold and cuddle courtesy of Featherdale Wildlife Park.

There will also be free tours of the newly-restored Female Orphan School  –Australia’s oldest three-storey public building – being held throughout the day, as well as art and history exhibitions, and displays from members of the NSW Police Force and Fire and Rescue NSW.

Then, at twilight, the historic Female Orphan School will transform into one of Australia’s most beautiful outside theatre spaces, as Wayne Harrison, former director of the Sydney Theatre Company and one of Australia’s most sought after creative producers, directs a special concert in collaboration with the Parramatta Riverside Theatres and the University’s Whitlam Institute.

Whitlam Institute Director and Provost of UWS Parramatta campus, Eric Sidoti, says planning and preparations for the event are in full swing.

“This day is a celebration of our University’s history, its achievements and its place in the community. Though the University of Western Sydney as it exists today is 25 years young, its roots go back to the very beginnings of the colony,” says Mr Sidoti.

“On this Parramatta campus we not only have the oldest building on any university campus in the country with the 1813 Female Orphan School, we are surrounded by a blend of heritage-listed grounds, historical buildings and state-of-the-art learning facilities. It is a unique environment and we just hope that our friends and neighbours will take the opportunity to come and enjoy it with us on 29 March.”

Mr Sidoti points out that the University through its foundation institutions has in fact been bringing knowledge to life in Greater Western Sydney from the establishment of the Hawkesbury Agricultural College in 1891.

“We are conscious of extending a much longer tradition as we recognise the knowledge of generations of the traditional owners of the land where the University’s campuses are located. It is humbling to think that these lands have been home to thousands upon thousands of years of care and stewardship by the Dharug people.

“We are so very pleased to have this opportunity to open our doors to the community as part of our 25th anniversary celebrations.

“We are particularly thrilled to have secured the extraordinary creative talents of Wayne Harrison who will be directing a concert for the community, so don’t miss out on what promises to be a very special occasion.”

The UWS 25th anniversary Autumn Fair is free – for more information, visit www.uws.edu.au/uws25
Tickets for UWS 25th anniversary outdoor concert by Wayne Harrison are also free, but bookings are essential – contact 8839 3399 or visit www.riversideparramatta.com.au (opens in a new window). You might also like to bring a rug.

WHAT: UWS 25th Anniversary Autumn Fair and Concert
WHERE: UWS Parramatta campus, corner of James Ruse Drive and Victoria Road, Rydalmere
WHEN: Saturday 29 March 2014
TIME: 11am-3pm for the Autumn Fair, 6pm for the Concert
COST: Free
PARKING: Parking is available on campus on the day and is also free