University of Western Sydney student Mark O'Toole has had a whirlwind first hand introduction to Asia. The Bachelor of Arts (Honours) student has recently taken part in two sponsored tours to meet business executives in Japan and government officials in China and exposing him to the people who drive policy and industry in the world's fastest growing region.

"The experiences I had in Japan and China were amazing," says the Londonderry resident, whose Arts degree majors in Asian Studies and International Relations.

"You would never be able to replicate the trip by yourself, the access I had to politicians and business leaders was incredible, and I learnt so much during my time there."

Mark realised a lifelong ambition by travelling to Japan under a scholarship organised by Mitsui & Company, one of the largest publically traded companies in the world. Taking in Tokyo, Osaka and Hiroshima, among other destinations, the scholarship exposed Mark to the history and society of Japan, and gave him the opportunity to speak to some of the most influential people in the country.

"The trip to Japan taught me so much about the country's strong sense of identity, and helped me understand how their history continues to help retain those distinctive yet fundamentally important cultural markers that make Japan so unique, despite being a modern, industrialised nation," he says. 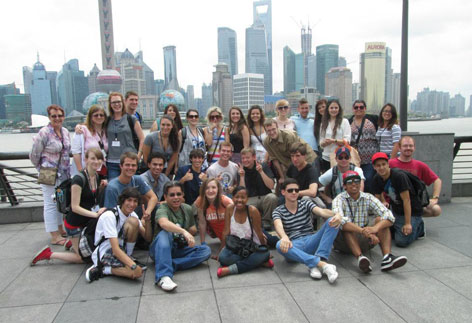 "Travelling to China has always been a dream of mine, and I was astonished at the sheer scale and magnificence of the country," he says.

"I also made some incredible friends and future contacts who I'm sure will help me when I leave university," he said.

Mark says he is currently aiming towards obtaining a PhD candidacy at UWS with the ultimate goal of becoming an academic specialising in International Relations and Security Studies in the Pacific Asia region.

"Staying engaged in academia is what I really want to do and I truly hope to be able to do that with UWS," he says.

"But then again in a few years time I could also see myself working as a diplomat with the Department of Foreign Affairs and Trade specialising on Australia's relationship with Asia.  There is no doubt that these trips, and in particular my education at the University of Western Sydney, has helped to open some very important doors for me."