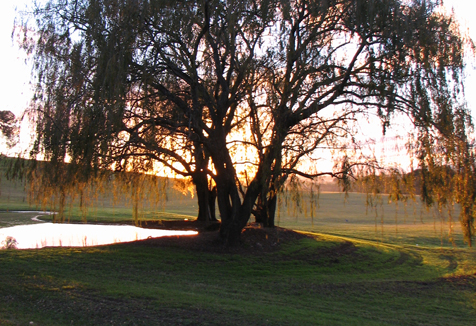 Pretty vistas of parks, gardens and bushland in your neighbourhood could be good for your health beyond just soothing your soul. New research has found community green spaces are encouraging people to exercise harder and more often.

A University of Western Sydney study of over 200,000 Australians aged 45 years and over found those living in areas with more than 20 percent green space within a 1 kilometre radius of their home were significantly more likely to walk and participate in moderate-to-vigorous physical activities (MVPA).

The research, one of the world's largest studies on the impact of green space on exercise, is the first among adults in middle-to-older age to show green space encourages walking as well as the more intense exercise that leaves people out of breath.  The results have been published in the British Journal of Sports Medicine.

Lead researcher, Dr Thomas Astell-Burt from the UWS School of Science and Health, says greener neighbourhoods promote not only weekly participation, but also more frequent sessions of walking and moderate-to-vigorous activity, such as jogging and team sports.

"The research results show access to green space is a potentially important lever for participation in physical activities at a community level," says Dr Astell-Burt, a population health epidemiologist.

Green space was found to increase the odds of a resident taking a weekly walk or engaging in moderate-to-vigorous exercise by 6 and 8 per cent respectively.

The results also showed in comparison to people who had access to little green space within their neighbourhood (0-20 percent), those with access to a large amount of green space (over 80 precent) were about 10 precent more likely to participate in walking and MVPA more than once a week.

The researchers adjusted the data to account for a wide range of variables including: age, gender, ethnicity, income, educational attainment, relationship status and psychological and physical health.

"It's clear the amount of green space is a key factor in a community's long term health. The location and size of green spaces in housing estates and urban renewal projects should be a health consideration not just one based on aesthetics or economics," he says.

"Some planning jurisdictions set minimum green spaces in new developments, perhaps we should consider introducing this more widely as well as guidelines for the location and size of these green spaces in relation to people's homes to maximise the health benefits."

Dr Astell-Burt says adults 45 and over report the lowest levels of physical activity, the greatest burden of chronic disease and the most frequent use of health services.

Maintaining an active lifestyle over the age of 40 has been shown to have positive benefits for individual health - reducing the incidence of chronic and complex health problems, such as Type 2 Diabetes Mellitus, which place a great demand on our health system.

"Our local environment can influence our health in both a positive and negative way.  As the population ages and the demand for higher density living in our cities grow, we will need to plan for green spaces – to have communities designed for exercise and better health."

Green space associated with walking and moderate-to-vigorous activity (MVPA) in middle-to-older adults: Findings from 203 883 Australians in the 45 and Up Study,  draws upon statistics collected by the 45 and Up Study in addition to data from the Australian Bureau of Statistics.

Green space is associated with walking and moderate-to-vigorous physical activity (MVPA) in middle-to-older-aged adults: findings from 203 883 Australians in the 45 and Up Study. Br J Sports Med doi:10.1136/bjsports-2012-092006.