The newly discovered mineral, Leverettite, has been named after Emeritus Professor Peter Leverett of the School of Science and Health at the University of Western Sydney.

Found in early 2012 by Arturo Molina in the Torrecillas mine, Tarapacá Region, Chile, the crystals of the mineral occur as green rhombs stacked in finger-like parallel growths, and are transparent and brittle in nature. 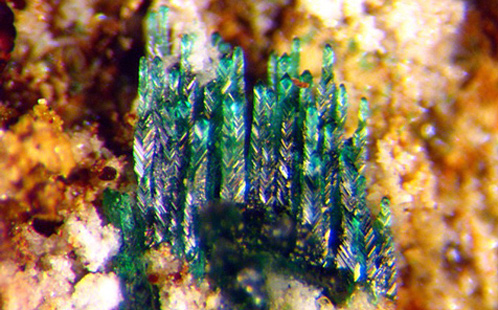 The mineral was named in honour of Professor Leverett in recognition of his contributions to research and teaching in the areas of chemistry and chemical geology.

"The naming of the new mineral was indeed a surprise and of course a great thrill – it's something you don't really expect," says Professor Leverett.

"It was rewarding to realise that the geochemical and mineralogical research which my colleagues and I, and our research students, have been doing over the past many years at UWS is held in such high regard by the international scientific community."

"The discovery of this new mineral increases our geochemical understanding regarding the formation of such secondary (or supergene) minerals from existing primary ore bodies."

Professor Leverett has been a Professor of Chemistry at UWS for nearly 24 years and is based at the Parramatta campus.