The opposition between democracy and capitalism 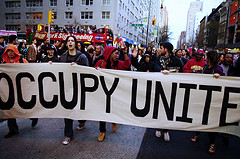 The recent wave of grassroots movements and public rallies in Australia and around the world against established political and economic establishments shows the increasing opposition between democracy and capitalism, says a visiting philosopher to the University of Western Sydney.

Professor Stathis Gourgouris, the Director of the Institute for Comparative Literature and Society at Columbia University, is in Sydney to present three lectures on secular criticism at the State Library, being held on May 21, 23 and 25 at 6pm, in conjunction with UWS, the ABC and Fordham University Press.

Professor Gourgouris says the palpable power of the market forces facing many citizens, such as those campaigning against coal seam gas drilling, is by definition political.

“The sphere of the political has never been more permeated by the economic than it is today,” he says.

“No energy company executive, banker, or resources minister, in thinking, writing, or deciding about the issues of concern to citizens, is engaged in anything but wielding political power.”

But Professor Gourgouris says the rising wave of grassroots and assembly movements across the world are proving to be extraordinary places for people to move democracy beyond the election ritual.

“Elections may signal democracy’s essence, but they are degraded and incapacitated when elected representatives are bought and driven by the economic interests of the powerful few,” he says.

“In contrast, assembly movements are characterized by the coming together of people representing themselves to declare their withdrawal of consent to established power.

“There are many particulars that merit specific assessment, but they are all particulars of one substantial generality: whatever happens in today’s world, which may decide irreversibly the future of the planet, is the consequence of an overt struggle between democracy and capitalism.”

LECTURE 1: Monday, May 21 "Secular Criticism as Poetics and Politics"

LECTURE 2: Wednesday, May 23 "The Prohibitive Politics of Political Theology"

LECTURE 3: Friday, May 25 "Autopoiesis, Autonomy, and the Human"