Do you know an extraordinary woman? UWS Women of the West nominations open now 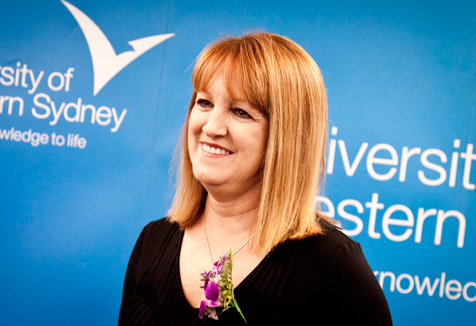 Lea Hicks, winner of the 2012 Women of the West Awards

It's time to start nominating inspirational women in Western Sydney for the annual UWS Women of the West Awards.

UWS Vice-Chancellor Professor Janice Reid says the annual awards are a particular highlight of the University calendar, with the winners announced to coincide with International Women's Day.

"Since we established these awards in 2005 we have come to know and celebrate many inspiring women – all of whom are making their mark on the Greater Western Sydney region in their own unique way," says Professor Reid.

"These women have come from many different corners of the community – business and local industry, education, health, charity and community groups – but what they have in common is their drive, passion and unswerving commitment to making our community a better place.

"UWS calls on the people of Greater Western Sydney to consider nominating a colleague, an acquaintance or a friend for the 2013 awards as a way to formally recognise their extraordinary achievements."

The winner of each category will receive a grant of $5,000 to further develop their leadership and advocacy work in their local community.

Lea Hicks, General Manager and Co-owner of the Hix Group Pty Ltd, was presented the 2012 Women of the West Award for her commitment to employing and training young people from Greater Western Sydney, and for her contributions to local community groups and charities.

"It was an honour to simply be nominated for such an award," says Ms Hicks.

"As a result of winning last year, the activities I am involved in have gained further recognition, and I was able to donate the prize money to the Australian Women and Children's Research Foundation, of which I am currently the Chair."

For an official nomination form and more information, visit: http://www.uws.edu.au/womenofthewest

Entries close Friday 30 November 2012. The winner will be notified in February 2013 and publicly announced at the UWS International Women's Day celebrations in March 2013.