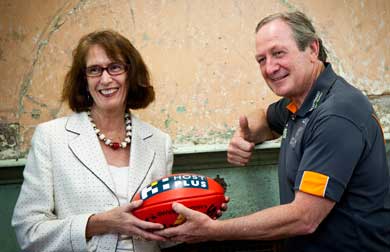 The club's NEAFL team will take to the field in 2012 under the name of the UWS GIANTS - a first in the AFL.

The UWS GIANTS will play in the curtain raiser to the first match of the 2012 AFL Premiership Season between the GWS GIANTS and the Sydney Swans at ANZ Stadium on March 24.

Kevin Sheedy presented the UWS GIANTS jumpers to the Vice-Chancellor at the announcement.

The naming of the UWS GIANTS NEAFL team is part of a broader partnership between UWS and the AFL's newest club, the GIANTS.

The GIANTS will also work with UWS on a range of ticket offers for students and other specially tailored membership packages to support the club as it enters its inaugural year in the AFL competition in 2012.

UWS and the GIANTS will work together on a wide range of initiatives across the areas of education, health and community, including:

Vice-Chancellor Professor Janice Reid says the partnership is an exciting one, with both organisations seeking to make a positive and lasting impact within Greater Western Sydney - home to over 1.8 million people, and the fastest growing region in Australia.

"We are pleased to showcase our partnership with the GWS GIANTS today, and the UWS student and staff community is delighted that there will be a team named for the University in 2012," says Professor Reid.

"From the outset, UWS has been a supporter of the AFL's plan to establish a team in Greater Western Sydney.

"Both UWS and the GWS GIANTS share the same energy and passion for the region. Whether it be in the classroom, on the football field, or in the research laboratory, together we can continue to help build the educational aspirations of Greater Western Sydney, and positively influence the health and well being of our communities."

GIANTS Chief Executive David Matthews said the support of organisations such as the University of Western Sydney was critical to the ongoing success of the club.

"We see this as a truly unique and exciting partnership and builds on our ongoing engagement with the community of Greater Western Sydney," he said.

"It also acknowledges the important role education plays in the community and that Greater Western Sydney is a region of innovation, ideas, enthusiasm and opportunity.

"We are proud to partner with the University of Western Sydney, an organisation that has opened up higher education opportunities in the region for many years and we also look forward to as many UWS student as possible supporting the GIANTS in the years to come."