US Consul General tells students to follow their dreams 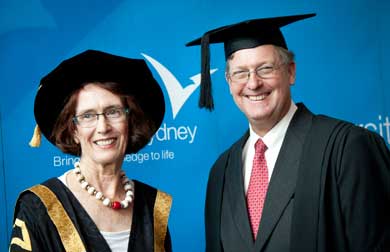 The United States Consul General Niels Marquardt has told a gathering of University of Western Sydney summer graduates to follow their dreams and passions as they strive to make a difference in the world.

Drawing on his vast diplomatic and educational experience as he addressed graduates from the UWS School of Law and Sydney School of Management, Consul General Marquardt outlined his belief in the transformative powers of education.

“To see such a diverse group from all over the world coming here today to get their degrees and to smile into the future is an uplifting experience,” he told the graduates.

“As I've travelled the world as a diplomat I’ve found every time there's a challenge, whether its corruption, health or development, the answer is education.”

Consul General Marquardt has served as U.S. Ambassador to Madagascar and Cameroon, and his overseas assignments have taken him to Germany, France, Thailand and Congo.

Consul General Marquardt told the graduates not to be afraid of making changes should they discover new passions as they advance in their careers.

“A lot of people are successful in their careers, but lack fulfilment. They may come home at the end of the day not certain that they made the contribution they’re fully capable of,” he told the audience.

“But if you can align your skills with doing what really makes you happy it will bring out the best in you and make you fulfilled as a human being.”

Even though the graduates have now been handed their testamurs, Consul General Marquardt urged them to never give up on study.

“Whether you’ve got a Masters or a Bachelor degree, or even a PhD, there’s always something new to learn, be it through formal or informal education - the most important thing is to keep the ability and hunger to learn,” he said.