Do you know an extraordinary woman? Nominations are now open for the UWS Women of the West Awards 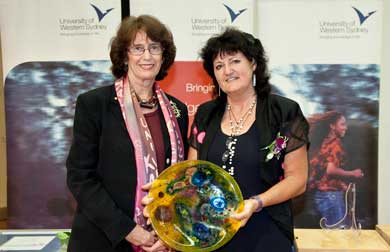 Take a look at the women around you - your family, friends, colleagues and neighbours. Do they endeavour to make your community a better place? Do they make a profound difference in the lives of others?

Perhaps it's time their hard work and dedication was recognised, with a nomination for the University of Western Sydney's annual Women of the West Awards.

UWS Vice-Chancellor Professor Janice Reid says the Women of the West Awards are a highlight of the University's calendar.

"The Awards are a way in which we can show our appreciation for those dedicated and extraordinary women who make our community a better place to live," says Professor Reid.

"I encourage people to consider nominating a colleague, friend, acquaintance or mentor for the 2012 Women of the West Awards, and join with UWS in celebrating the significant contributions and achievements of women in Greater Western Sydney."

Dr Helen Somerville, a paediatric doctor with the Western Sydney Local Health District and Allowah Children's Hospital, was presented the 2011 Woman of the West Award for her commitment to the care of children with disabilities.

She encourages people from Greater Western Sydney to look amongst their own networks for deserving women, and take the initiative of nominating them for the Awards.

"It was really lovely to be recognised as the Woman of the West. Just being nominated meant so much to me personally, but it also meant a lot to my patients and colleagues," says Dr Somerville.

"By winning the award, the needs of people with disabilities were brought straight to the forefront. It showed my patients that their needs are important, and that there are people out in the community who care."

Now in its eighth year, the Women of the West Awards formally recognise the significant contributions and achievements of women from a variety of backgrounds including business, education, health services, community groups and local industry.

Entries close Friday 16 December 2011. The winner will be publicly announced at the UWS International Women's Day celebrations in March 2012.