Diverse trio receive Honorary Doctorates for service to the community

Honorary doctorates were presented at the inaugural University of Western Sydney School of Medicine graduation ceremony in recognition of the distinguished community service of Emeritus Professor Bruce Barraclough AO, Professor Alexandra Bune AM and Mr Peter Brennan AM.

Vice-Chancellor Professor Janice Reid AM says each recipient has contributed in different ways to the success of the UWS School of Medicine and advanced the health and wellbeing of people in Greater Western Sydney and beyond. 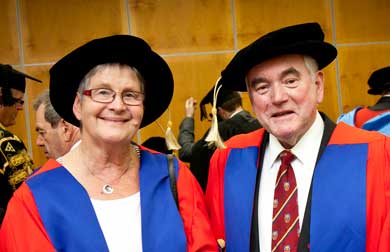 Professor Alexandra Bune AM and Eweritus Professor Bruce Barraclough AM

Emeritus Professor Bruce Barraclough is regarded as a clinical and governance leader across the field of cancer care and treatment. In 2004 he accepted the University’s invitation to chair the Expert Advisory Group that was given the task to advise the University on the establishment of a UWS medical school. In 2006 he was appointed as Associate Dean (Clinical Strategy) in the School.

Professor Alexandra Bune came to UWS as a member of the Medical School Expert Advisory Group and subsequently took up the role of Associate Dean (Academic Planning). As a physician her clinical experience has been in cardiovascular and general medicine with a special interest in hypertension.

Professor Reid says both distinguished Professors received an Honorary Doctorate of Science in recognition of their outstanding service to medical education in Australia and to the University.

“As educators, both Bruce and Alexandra have had an impact on the professional lives of some our nation’s finest doctors, including clinical academics from UWS. Our School of Medicine has been shaped by their experience, their energy and their spirit,” says Professor Reid. 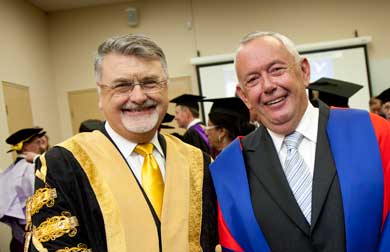 Mr Peter Brennan AM, Chief Executive Officer of Bradcorp, has been a long time advocate of social and corporate responsibility.The Bradcorp Community Partnership Fund has provided substantial funding for community projects in the Macarthur region for more than twelve years.

In 2010, Mr Brennan was made a Member of the Order of Australia for service to the community of the Macarthur region through a range of health, educational and social welfare organisations, and to the housing industry. In 2003, he was named a Paul Harris Fellow by the Rotary Foundation of Rotary International. He has also served as President of the Bobby Goldsmith Foundation from 2000 to 2005.

Professor Reid says Mr Brennan’s support for the University and the School of Medicine has been vitally important to the success of Western Sydney’s only medical school during its foundation years.

“When the intention to create the UWS School of Medicine was announced in 2004, Peter was one of the first to ask how he could help,” says Professor Reid.

“Peter shares the University’s vision for delivering educational opportunities to the people of Greater Western Sydney which bring life changing benefits to both students and the wider community.”

In 2008, on behalf of Bradcorp, Mr Brennan made a major donation to establish what is now the Peter Brennan Chair of General Practice in the School of Medicine.

Mr Brennan says he is humbled by the University’s recognition.

“I thank the University of Western Sydney for this honour. It gives me great satisfaction to witness the achievements of this young university’s new School of Medicine and its first graduates,” says Mr Brennan.

“This University is making a real difference in the lives of many in Greater Western Sydney; through the educational opportunities it offers for our growing population and perhaps most importantly, for the betterment of the health and well being of the community.”