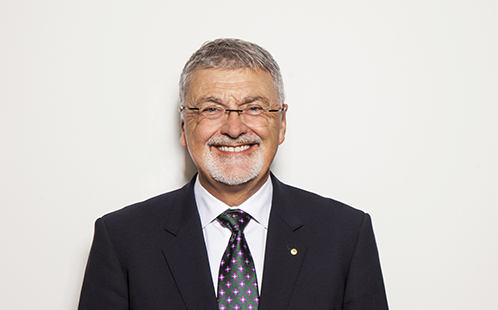 He has served as Chancellor since 2011, continuing a highly-respected career that has spanned academia and Australian public life for over 30 years, including serving as Secretary of the Department of the Prime Minister and Cabinet from 2003–2008.

Having served three consecutive terms, the Chancellor’s outstanding service was acknowledged by the University’s Board of Trustees at its 8 December 2021 meeting.  Further, the Board resolved to formally convey its sincere thanks and appreciation.

Vice-Chancellor and President, Professor Barney Glover AO, thanked Professor Shergold for his exemplary leadership of the University’s Board of Trustees, and acknowledged the extraordinary contributions he has made as Chancellor across every aspect of University life and the broader University community.

“Professor Shergold’s decades of knowledge and wealth of experience have been indispensable as he has strategically shaped and guided the University through an incredible period of change, growth and development for more than a decade. For this we owe him a debt of gratitude,” said Professor Glover.

“He has been one of the strongest and most passionate advocates for this University, our students, and the transformational power of higher education, as well as for the Western Sydney region and its diverse and vibrant communities.

“Among his many and varied achievements, is his leadership of the Board to oversee an ambitious program to leverage University assets to build new educational and research infrastructure. This program is co-creating cities across Western Sydney in partnership with industry and government – not only ensuring the University is a catalyst for the region’s economic advancement and social prosperity, but leaving the University in a robust position to respond to future challenges.”

Professor Glover said the Chancellor has been a leading voice for social justice and social inclusion; and has nurtured the University’s distinctive identity. He has been passionate about promoting excellence in teaching and learning, research and engagement with the University’s local communities; and instilled a strong culture of philanthropy and social investment amongst the University’s staff and students.

In addition to his commitment to the University, Professor Shergold has provided an outstanding national contribution to policy development and higher education in a range of roles.  These include as Convener of the University Chancellors’ Council (2016 - 2018), Coordinator General of Refugee Resettlement in NSW, and advisor to State and Federal Governments including, most relevantly, with David Gonski AC for the Review on the NSW vocational education and training sector, entitled ‘In the same sentence: Bringing higher and vocational education together’.

“He has also brought his own brand of warmth, ease and humour to these roles. At the University, this is evident in the many graduation ceremonies he has presided over during his tenure, where he has conferred degrees on thousands of graduands – many of whom are the first in their families to attend university – and shared in the celebrations with proud families,” Professor Glover said.

To begin the process of selecting and appointing a new Chancellor, at its 8 December meeting the Board of Trustees also resolved to establish a Chancellor Nomination Committee and approved a Role and Profile Statement. A copy of the Role and Profile Statement can be found via the web page (opens in a new window). The Board of Trustees expects to be able to advise of the appointment of a new Chancellor in August next year, in anticipation of their commencement on 1 January 2023.