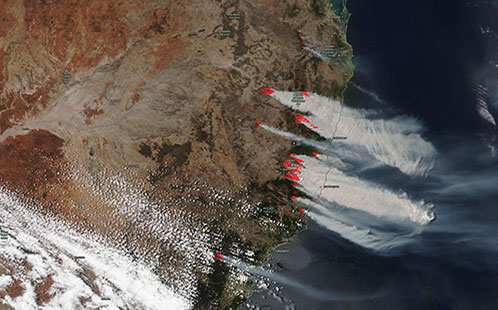 An unprecedented outbreak of large, intense fires stretched from the mid-north coast of New South Wales into central Queensland.

Researchers at Western Sydney University’s Hawkesbury Institute for the Environment have analysed historic data on the extent of Australia’s extraordinary forest fires and found that the area burned in Australia during the 2019-2020 forest fires far exceeds historic records worldwide.

Even in previous major fire years, only around two per cent of Australia’s temperate forests have burned. Yet in the summer of 2019/2020, an astounding 21 per cent of these forests have been burned, a figure far and above preceding historic records.

“Forests in Australia and other continents have historically burned up to approximately 5% of the forest area each year, with higher percentages of 8-9% only recorded in small forest regions of Africa and Asia. Yet in Australia’s 2019/2020 season, this burned area jumped to 21% of the total forest area in a single season.

“This is a globally unprecedented scale of burning, not observed in any other forest biome over the last 20 years”, Associate Professor Boer said.

Australia’s eucalypt-dominated forests are part of the Temperate Broadleaf and Mixed (TBLM) Forest Biome, which covers millions of hectares in Australia and other continents. They are among the most fire-prone forests on Earth, being shaped by fires that are triggered by occasional periods of drought and heat. In normal years, fires would burn mostly through dry litter on the ground and are kept in check by damp gullies and south-facing slopes that hinder the spread of fire and reduce the probability of mega forest fires.

However, after three years of extreme drought and driven by high temperatures and winds, fuel conditions were drier than ever recorded in 30 years, escalating fires ignited by lightning from dry thunderstorms that spread over millions of hectares from September 2019 onwards.

This analysis was published as a Letter to the editor in Nature Climate Change.(opens in a new window)