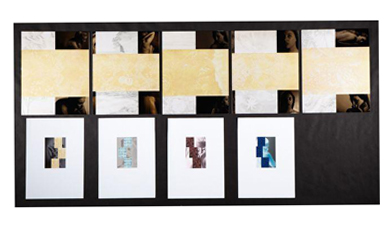 Of the thousands of HSC Visual Arts students that submit their work for marking, ARTEXPRESS has built a reputation for exhibiting the best of the best.

The young artists whose works are chosen to grace the walls of the Art Gallery of NSW, or tour NSW as part of the regional exhibitions, are selected for their obvious talents and superior skills that exceed their age and experience.

At the opening of the regional exhibition within the Margaret Whitlam Galleries at the UWS Parramatta campus on Friday 29th June, one artwork was recognised for pushing the boundaries of its medium.

Courtney Hansford, formerly a student of Wyndham College in Blacktown, was presented with an award from the University of Western Sydney, in recognition of the innovative qualities of her artwork, Polychrome: Metaphors and Similes.

“Naturalistic photographs that portray one woman who is ‘confident in her own skin’ are dramatically juxtaposed with scanned images of fabric and floral designs, and overlain with tone-drop-out Photo-shopped figures,” says Ms Jones.

“Printed on metallic paper, this work presents a dreamlike quality that despite its harsh message is subtle and engaging.” 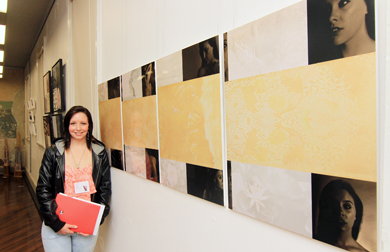 Courtney Hansford, with her winning artwork Polychrome: Metaphors and Similies at the UWS Margaret Whitlam Galleries

Courtney, who is now a first-year Bachelor of Communications (Media Arts Production) student at the UWS Penrith campus, says she is proud that her HSC artwork is being exhibited at her University.

“It took a lot of work to realise the concept for Polychrome: Metaphors and Similes. The initial idea was conceived in December of 2010 and I was working on it solidly from February to August in 2011,” says Courtney.

“My biggest inspiration was the artist John Young. I took all of the photos myself – the studio photos with the model, as well as the landscape shots – and manipulated them in Photoshop. There was a lot of post-production work involved, which I was able to do in class as well as at home.”

Polychrome: Metaphors and Similes is a collage of colour digital photographs and wallpaper, printed on metallic paper. The photographs include images of a young, nude woman, set against a rocky cliff face. “My concept is generated from the idea that women have to live up to expectations created by men and the media,” says Courtney.

“Girls are always trying to live up to what they see in the media, and what boys want them to be. The idea came from my personal experiences, as well as the experienced of other girls, who feel the need to be something that they are not to impress others.

“In my artwork, the model is completely exposed. By being nude, she is forced to be only herself, and in the most naturalistic way possible to show her confidence in her own skin. Like the landscape, she is as she is.”

ARTEXPRESS is presented by the NSW Department of Education and Communities and the Board of Studies NSW. The University of Western Sydney is a supporting sponsor of ARTEXPRESS.

The UWS ARTEXPRESS Exhibition is open until 28 July 2012.

For a full list of ARTEXPRESS Exhibitions and student artworks, please visit: http://artexpress.artsunit.nsw.edu.au/