The health of the river system

What are the issues?

Chemical and nutrient run off from residences, farms and industries, plus treated waste from 20 major sewage treatment plants, are polluting the water. Chemicals such as heavy metals and pesticides can harm or kill many of the animals and plants that live in the water. Excess nutrients such as Nitrates and Phosphates entering the catchment called eutrophication are leading to issues with increased algal and aquatic plant growth, chocking the river thus reducing the flow and decreasing the dissolved oxygen in the water (hypoxia). In the case of blue-green algae,  toxic chemicals released from the algal bloom which can harm people and animals living in and using the water. Increased nutrients can increase terrestrial weed growth on the riverbanks, which impacts on the quality of habitat and the natural flow of water.

Water is constantly drawn from the river for use which has changed the waters natural flows. As a result there is not enough water in the river to regularly flush the system of pollutants, like algae and nutrients.

What is water quality?

Water quality is defined by its chemical, physical and biological characteristics. It is a measure of the condition of water relative to the requirements for use.

The quality of water in lakes, rivers and oceans, vary significantly due to differences in the environmental, 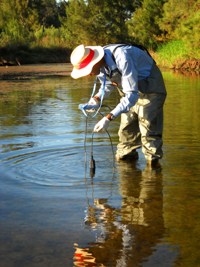 ecosystems and human impacts. The quality of the water not only affects our uses but also affects fauna and flora, both aquatic and terrestrial. Water quality is very poor in some catchments, resulting in the people and communities that rely on the river for food, now no longer being able to eat the fish they catch or use the water for stock such as cattle.

The water quality of a river is largely a result of the landuses such as; agriculture, urbanisation, bushland, and the geology etc within the catchment. Water quality is also a product of the processes that occur in the water itself (in-stream processes) such as the flow rate, aquatic life and the temperature.

Why is water quality important?

Our water resources are finite, they are of major environmental, social and economic value to NSW. If water quality becomes degraded this resource will lose its value.

If water quality is not maintained, it is not just the environment that will suffer - the commercial and recreational value of our water resources will also diminish. Many of the businesses on the river such as;  the prawn and oyster fisheries industry down stream to the recreational users like the water skiers and the farmers drawing water for stock and the irrigation of crops.

As a major source of our local economy and central to our communities, the rivers health and its influences are far reaching, it is very important that we look after this natural resource.