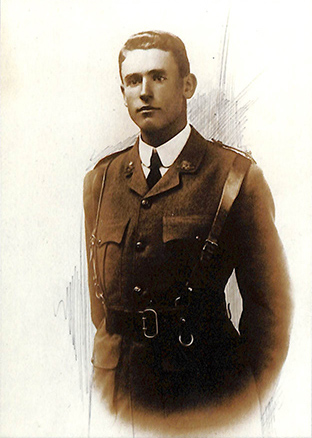 AI-11007 Harold Thomas Watkins (ex-student) Hawkesbury Agricultural College. Watkins completed the Hawkesbury Diploma of Agriculture in 1913. Lieutenant HT Watkins, C Company, 13th Battalion, 4th Brigade Infantry Australian Imperial Expeditionary Force was killed at the Dardanelles soon after the Gallipoli landings April 1915. Watkins' brother, Wallace Roy also a HAC student in 1914 who enlisted in the Veterinary Corps, returned from the war, completed the Hawkesbury Diploma of Agriculture in 1920 and worked at HAC as Farm Manager for more than a decade and later donated this portrait to the Archives. P1402 A group of wounded soldiers from No.4 Australian General Hospital Randwick on an outing to HAC, 18 December 1918. The man carrying his legless friend on his back had 2 artificial legs himself. An entry from the HAC Journal (February 1919, Vol.16, p.26) reads: "On December 18 last, a party of wounded soldiers from No.4 Australian General Hospital, Randwick, visited the College. They were conveyed in two cars, the property of Mr. Winn of Oxford Street, Sydney, who is indefatigable in his efforts to relieve, in this way, the tedium of hospital life. Our visitors were nearly all leg cases, two of the party having lost both legs. This was not at first apparent, till a finely built young fellow in mufti was seen carrying his legless mate on his back, and it was explained that he himself had two artificial legs. From his easy manner of walking, the perfection attained in artificial limbs was at once apparent. The two men in question are seen on the right of our illustration".

Souviner of the Greatest War 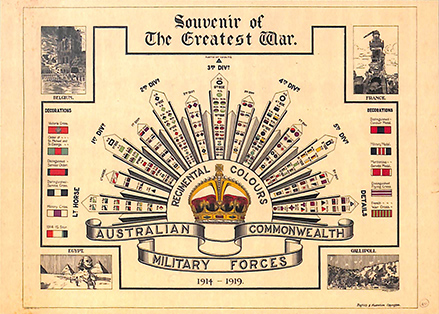 AI-46404 Souvenir of The Greatest War 1915-1919. This souvenir poster was drawn by Sergeant F.G. Goss of the Australian Imperial Force and was printed by J Graham Litho of London. The poster details the regimental colours of the Australian Divisions and Battalions, theatres of war Australians fought in and the decorations that were awarded. This item could have been purchased by an ex-student or staff member and sent to the Hawkesbury Agricultural College. P2417 The Australian Women's Land Army established a training school for Land Army women at HAC in 1943.  UWS Hawkesbury's Centenary year, 1991, coincided with the 50th anniversary of the Australian Women's Land Army.  On 18 August 1991 former members of the AWLA helped Hawkesbury celebrate its Centenary Open Day with a reunion on campus. The Social Secretary, Jean Scott, and author of  'Girls with Grit' (published by Allen & Unwin, 1986) presented a copy of her book to the University along with a photograph album of photos of the Land Army women at the College. 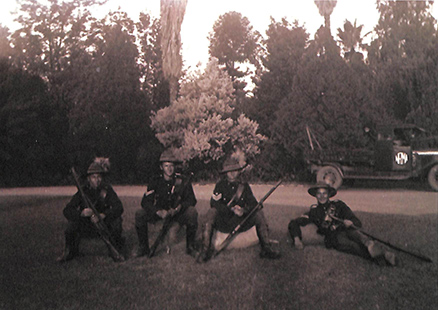 P6071 College Students in Uniform of the 4th Cavalry Mobile Veterinary Section is an image lent by Michael Hindmarsh (HAC student 1961-63) to the Archives for scanning and inclusion in the collection. Michael was the third generation from his family to attend Hawkesbury Agricultural College and this image is of his father Charles Alfred Hindmarsh (student 1935-1937) and other members of the Cavalry. Once scanned the originals were returned to Michael Hindmarsh. In the background is a tow-truck from Hawkesbury Garage (Windsor) with an NRMA badge on the door. The first suggestion regarding the formation of this unit at the College came from Captain F. Whitehouse, then lecturer in veterinary science, who pointed out to the military authorities what an ideal location the College would be for a mobile veterinary section and what excellent material there was at the College to fill it. The unit was transferred from Singleton in November 1923 to the College. In September 1940 the unit was closed down, because of the difficulties associated with the personnel of the 4th C.M.V.S. attending camp during the College term leading to a break in the College curriculum.  [Excerpt from History of Hawkesbury Agricultural College (Vol. 1) - History & Reminiscences, 1891-1941 by RN Dart (pp.142-144)]