Like, no offence but Ja'mie's private school stereotypes will make you laugh… and cry 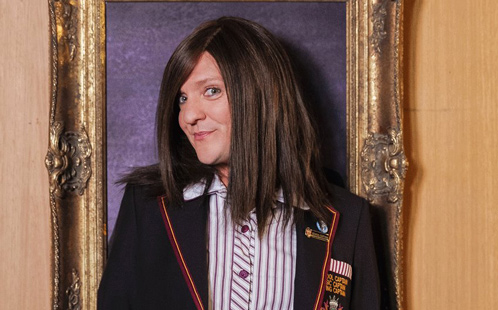 This article by Jane Caro from the UWS School of Humanities and Communication Arts was originally published at The Conversation.

I admit it; I loved Ja'mie: Private School Girl.

The new comedy series, which premiered last night on ABC1, fed all my prejudices and biases, unconscious or otherwise. The show's writer, Chris Lilley, who also plays Ja'mie, has created a monster of privilege and ego in this character – a magnificent comic creation with just enough truth about her to make us squirm as we laugh. Clearly the granddaughter of Dame Edna, Ja'mie King has exactly the same blind self-satisfaction that makes both Aussie females so horrifying, hilarious and strangely admirable.

Ja'mie is who she is, and not only does she not apologise for it, she expects to receive nothing but applause. It is interesting that both female characters are played by men. I'm not sure I want to think too hard about what that means - except to say that the distance it creates between the performers and their characters probably helps them to see so acutely.

Ja'mie accepts her privilege as nothing less than her right and her due as, I suspect, do most of the offspring of the well-to-do. Indeed, I recently ran a creative writing workshop in a school not a million metaphorical miles from Ja'mie's fictional Hillford Girls Grammar School, and before I began the teacher who had organised it sighed deeply and asked if I could somehow disabuse the girls of the notion that they were all going to end up CEOs of major corporations one day.

Unlike Lilley, she wasn't joking.

Because, as Private School Girl makes abundantly clear, Australia is rapidly creating a class system via the mechanism most of the rest of the world has at least attempted to use to dismantle theirs - school education. As I have experienced personally, it has become an act of some courage for a relatively prosperous family to actually choose a public, comprehensive school for their children.

It is now simply accepted that if you are a good parent, particularly with aspirations to identify as part of an upper class, you will send your children to the most expensive fee charging school you can afford.

In Summer Heights High, Lilley's most recent show featuring Ja'mie, her disdain for the public school she suddenly found herself in was refreshingly frank and honest. That's the endearing part of both Everage and King, they say what they mean – which is often what most people think.

But unlike the rest of us, they feel absolutely no need to apologise for it. They are like our secret selves let loose in all their venal snobbery and self-aggrandising narcissism – and what a relief it is to see our hypocrisy run free.

Most public school parents have probably found themselves either attacked or – more commonly – patronised. "I hear it's a very good school!" says the horrified private school mother, with a ghastly fake smile, as she reacts to the startling news that the perfectly reasonable looking woman she's just met is actually a creature from another planet entirely – planet public.

As a lifetime resident of that planet, it is - I have to admit - deeply satisfying to watch the hypocrisy and smugness of our critics called to account, particularly if you've ever had to put up with someone lecturing you about the better "values" inculcated by private schools.

Apart from what Private School Girl says about schools and the sense of entitlement that we are busy nurturing in many of our young, last night it also made some profound observations about how power and privilege in general are still distributed in our society. The relationship between Ja'mie and her parents was particularly revealing. Mrs King received nothing but insults and contempt from her daughter from the beginning of the program to the end.

As she ineffectually tried to rein in the monster daughter she had created, Ja'mie carelessly flicked her mother (and younger sister) away as if they were flies.

Her father, however, was a different kettle of fish. Ja'mie was clear-eyed about who was the powerful member of her family and accordingly flirted (in an astonishingly creepy fashion) with the man who ruled the roost. She even enlisted him in bullying her mother:

"Tell your loser wife to stop bitching in my face."

One lesson Ja'mie has learnt well is how to identify winners and losers, between schools, in gender politics, even in her own family. In her school, there is a clear hierarchy; boarders (hilariously dismissed as "vagatarians") and Asians are losers and can be insulted and bullied at will.

Like his eldest daughter, Mr King is deaf, dumb and blind to his fortunate position. He simply expects to be treated as the lord and master. Lilley adds another layer to the satire of unconscious privilege by making the Kings South African.

Ja'mie has learnt her lessons about power and privilege at her father's knee and he idealises her in return. Blind not only to his own assumptions of superiority, Mr King describes his monstrous daughter as special (if I hear one more parent say that about their offspring, I'll have to kill them) clever and – the final irony – kind.

From her self-conscious social tourism with the black kiddies to her vanity (the large picture above her bed is of herself), Ja'mie King (despite her bogan name – she should be called Annabel or Cressida) is a girl we all recognise. Indeed, private school girl though she clearly is, there are a few similar specimens in some of the better class of public schools.

Lilley knows these people well. He is doing us a great service in exposing the falsity and hypocrisy of the values we are surreptitiously teaching far too many of our children, while making us laugh at ourselves as he does so. Now that's a gift.