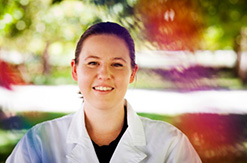 Nothing can hold Lisa Stojanovski down – not even gravity. The Bachelor of Science (Advanced Science) (Hons) graduate hopes to become Australia’s first female astronaut and dreams of moving to Mars. “I tell people I plan to die on Mars,” says Lisa, who happily calls herself a “huge nerd”.

She also calls herself a Martian gardener and spends her spare time researching ways to grow food on Mars.

This work earnt her an Emerging Space Leaders Grant and a ticket to the 2016 International Astronautical Congress in Mexico. “Life on Mars is totally feasible if we have the right vision and pursue the science and engineering we need to get there,” Lisa says. “We’ve been exploring this world for so long – Mars is the next logical step.” As a travelling science presenter with the Shell Questacon Science Circus, Lisa shares her passion for all things space with children in regional towns across Australia. She also produces a YouTube space news program for US channel TMRO aiming to spread enthusiasm for space and STEM (science, technology, engineering and mathematics) subjects. “I try to tap into kids’ natural passion for science and show them how it can be fun.”

Raised in Seven Hills, Lisa credits her Western studies, aided by an Academic Excellence Scholarship, for her career opportunities. “My degree opened all the doors,” she says. “I studied space with a focus on biology … for space travel to work, we need to make sure humans, plants and animals can survive there.”

Science was a natural choice for Lisa, whose space obsession began when she was eight.

“My dad gave me this huge book about space and even though I struggled to carry it, I read it from cover-to-cover and absorbed all the knowledge and wonder,” she says. Waking up in the middle of the night to watch satellite launches live over the internet became routine, and Lisa has also travelled to the US for the full effect.

In her daily life, Lisa views everything through the lens of eventually moving to Mars. “I don’t like to have a lot of belongings and try to live like a nomad,” she says. Until that dream spot on a Mars mission comes up, Lisa is pinning her astronautical hopes on Australia partnering with the European Space Agency and on commercial space travel taking off. But she’s also philosophical about her prospects. “If I don’t get to pursue my dream of going into space, I’ll keep taking what I’ve learnt, sharing it with kids and inspiring them,” she says. “If I can make that journey into space easier for just one kid, it will all be worth it.”

Editor’s note: Since this article was written Lisa participated in a brief NASA Mars Simulation in Hawaii.