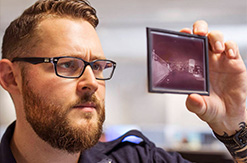 ‘I was always interested in law enforcement and science, and studying forensics was the perfect way to unite those two interests.’

‘At the time only two universities offered Forensic Science and the big appeal of studying at Western was a more hands-on experience.
The field experience at Western really sets students up for the workforce. When I was looking for jobs I actually had case files of work we'd done with simulated crime scenes, which could only be done at Western.’

What led you to the Police force?

‘My plan was to be a cop and get into some sort of crime scene work. My first job was as a lab supervisor at Western, while I waited to get into the Police as a sworn recruit. Then, because there hadn't been any positions advertised for a few years, I took this job in the Forensics Imaging Section, which I originally saw as an interim opportunity.

What ended up happening was I had a unique role, developing a new technology and service using 3D scanning and 3D crime scene reconstruction systems to analyse evidence.

So when I was offered a spot at the Academy – a month after the Lindt Café siege – I turned it down because I still had work to do here.’

‘We use 3D scanning to capture anything from an entire crime scene in a multi-level building, or a crashed car, down to very fine details with millimetre accuracy of weapons, bodies and wounds. We can reconstruct those 3D images and analyse them, either on screen or by 3D printing a model.

3D printing allows investigators and jury members to actually hold and handle a kinaesthetic model of the evidence, without causing damage to the original.

A lot of hard work, statistics, math and science go into producing a powerful and valid result that will to stand up in court and I’m motivated by that hard work. I’m not at an organisation where profit is the main motivating factor: I’m going to work knowing what I do is helping bring people to justice.’

Reflections on your journey

‘I never envisaged I would end up recognised as an international subject matter expert in 3D imaging and crime scene reconstruction. What I’ve learned from my experience at Western and now in my career is that opportunities present themselves when you least expect them – and while it’s important to have a plan and move toward a goal, you must be adaptable.

Keep growing and keep learning, because being able to change and adapt to challenges unlocks doors you may have never know existed.’