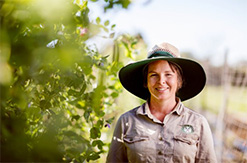 How Alice Warner made the switch from primary school teaching to community-supported agriculture.

At 33, Alice Warner was raising a family and had been teaching in public schools for a decade. But her job satisfaction had long faded. She’d heard Western Sydney University was offering a new course: the Bachelor of Natural Science (Sustainable Agriculture Food Security) at the Hawkesbury campus.

She wondered about farming, wistfully recalling school holidays tending her grandfather’s vegetable garden, and her deep pride in growing organic food for her own family in her Springwood backyard.

She took the plunge and enrolled.

“The course was the best I could find.” Ms Warner says. “This kind of farming, organic, small-scale regenerative is quite new. Community-supported agriculture is also quite new in Australia… (so) Sustainable Agriculture and Food Security was the closest to society’s emerging concerns about the need to change the food system and food security issues.”

During second year studies, a Hawkesbury lecturer alerted her to a farmhand job and she started working the 1.6-hectare block (approximately 16,000m2) that was to become her own. The farmer was growing edible organic garnish for high-end Sydney CBD restaurants.

Alice took over in 2017 and grew vegetables.

She says the course was pivotal to her business, especially the emphasis on soil science, plant nutrients, the practical experience in growing crops on campus and discussions about the survival of the Sydney Food Bowl.

Six years later, after graduating from the course, she now runs Five Serves Produce on the Hawkesbury.
She has a staff of five: three working in the fields and two drivers.
She takes her new baby daughter to work. She also mentors Western students.

“We deliver to Parramatta, up to Blackheath and across to Kurrajong, and over to Penrith, but I don’t want to go any further. There’s a big population in the West that deserves good organic food and it’s much easier for the people in the city to get access to it than it is for us,” she says. “Picked today, get it today or tomorrow. That’s our promise; less than 24 hours later. That’s what makes us different to buying off the supermarket shelf. You can taste the difference. You can also see it.”

Visit fiveservesproduce.com.au to find out more about the vegetables at Five Serves Produce cultivated by Alice and her team. The farm aims to be a welcoming place where the local community can meet their farmer and learn more about how their food is grown.