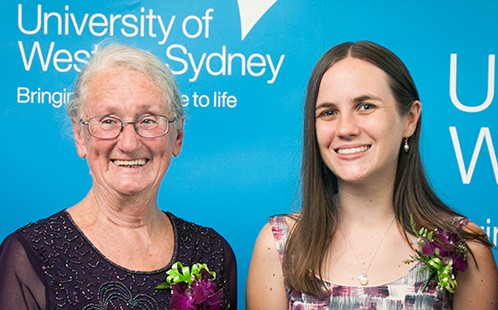 Congratulations to our two winners for 2014.

Winner of the UWS Women of the West Award for 2014
Aunty Frances Bodkin, Dharawal Elder and Knowledge Holder: Scientist; Educator. 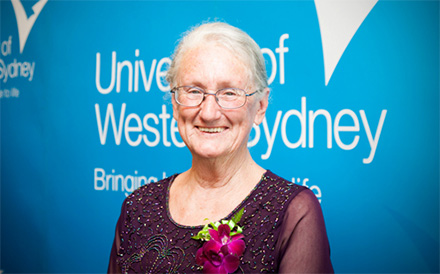 A resident of Tahmoor in the Wollondilly Shire, Aunty Frances Bodkin, known to many throughout the region as Aunty Fran, is a Dharawal elder, 'keeper' and teacher of Aboriginal environmental science and traditional Dharawal Aboriginal knowledge.

Aunty Fran has degrees in Environmental Science, Geomorphology (study of landforms) and Climatology. Although retired, she has a very strong commitment to educating our region's youth on Aboriginal environmental science and Aboriginal culture, with a passion that truly reflects her connectivity with place. Aunty Fran brings a holistic view of the environment through powerful story and demonstration.

As an educator, author, advisor and speaker, Aunty Fran has brought a wealth of knowledge and experience that encompasses both the Western education system and the understandings of an Aboriginal experience.

Her publications include the much-quoted Encyclopaedia Botanica: the Essential Reference Guide to Native and Exotic Plants in Australia (1981); D'harawal: seasons and climatic cycles (2008); D'harawal: dreaming stories (2013) and D'harawal climate and natural resources (2013).

Aunty Fran believes 'knowledge is our prime resource – we must treasure it' and from lessons in the classroom to field trips, media appearances, and lobbying, Aunty Fran continues to educate and influence students and adults in western Sydney and beyond.

Aunty Fran was nominated by Anne McLean, Manager of the Schools Engagement Unit with the University of Western Sydney. 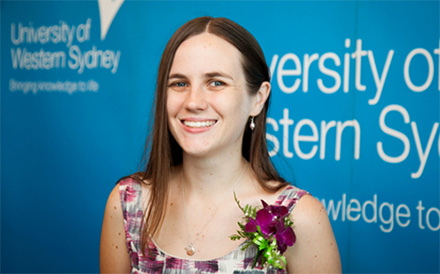 Amy Krisenthal, a resident of Shalvey, has been recognised for her outstanding dedication to the learning and welfare of young people in Western Sydney and beyond.

In 2009, Amy commenced teaching English at Chifley College, Shalvey Campus. Her contribution to the school and to student learning and welfare in this short time is rare and exceptional. She has been recognised as an outstanding classroom teacher, educational leader and advocate for improving the educational outcomes for young people.

A recipient of the 2012 Minister's Quality Teaching Award, Amy was recognised for elevating the level of achievement of her students in NAPLAN and school assessments, and for differentiating delivery of the syllabus to meet the needs of individual students.

Amy's passion for the learning and welfare of young people extends well outside the classroom.

In the school holidays, Amy has volunteered her time to tutor youth at the Mary Reiby Juvenile Detention Centre. These young boys at risk from all over NSW have benefitted from her creative and talented mind, and generous heart.

In 2013, Amy volunteered her time to become part of a group travelling to Bourke, in far Western Sydney, to spend Fridays and weekends planning and implementing a support program to help Aboriginal children in their transition from primary to high school.

Amy was nominated by Donna-Lee Duval, Head Teacher of Mathematics with the Chifley College, Shalvey Campus.

Nominees for UWS Women of the West Diana Aspinal, a resident of Blackheath in the Blue Mountains, has been nominated for her leadership and advocacy in health for the people of Western Sydney.
Diana has lived in the Blue Mountains for the last 18 years and is currently the board director of the Nepean Blue Mountains Medicare Local. A retired nurse, Diana suffers chronic health issues and these factors have given her a deep understanding of the local Blue Mountains community and their needs.

Diana has a multidimensional background in consumer health advocacy on national, state and local levels. She has given voice to consumers and helped to give them the capacity to become active participants within the health system and in their own health care. An example of her recent work was a local consumer lead research project – "the Evaluation of Blue Mountains Cancer Help." 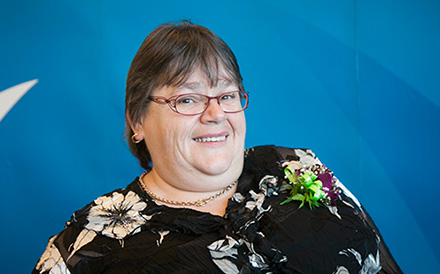 Cathy Gault, a resident of Mt Riverview, has been recognised for her work as Chaplain for the Nepean Public Hospital, Chairman of the Thorndale Foundation and as a member of the Presbyterian Women's Association (PWA).

Her Chaplaincy work covers 9 wards at Nepean Hospital. She is a caring and calming presence, performing dignified ceremonies to assist people in their deepest moments of need, such as the loss of a new baby or loved one, is always listening, respectful and there to help where ever possible.

As Chairman of the Board for the Thorndale Foundation, a Not for Profit Organisation that cares for intellectually disabled adults, Cathy has successfully navigated the Foundation through a period of organisation change.

An avid cook and quilter, Cathy has volunteered her time teaching quilting to the female inmates of the Emu Plains Correctional Facility and regularly donates her time to fully cater for Christmas dinners and AGMs for the PWA and its members.

Cathy is a loving wife, mother and grandmother who is always looking for opportunities to help those around her in quiet and caring fashion, last Christmas she instigated a Carol-Singing for patients at the Governor Philip Manor Aged Care Facility, which bought happiness and joy to all those in attendance. 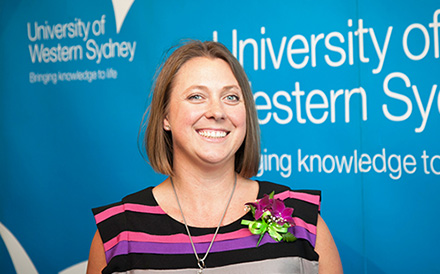 Belinda Sidman, a resident of the Wollondilly Shire, has overcome many hurdles after a tragic car accident left her with permanent disabilities. Belinda has shown great courage and pursued studies in nursing and volunteer work in the community to assist others with physical disabilities.

Belinda is currently an enrolled nurse at Bowral & District hospital and was awarded for the hospital's Clinical Excellence Award upon completing her traineeship. She has been noted for her "high motivation, strong determination, loyalty and dedication" to anything she sets out to achieve.

She is an inspirational figure and role model, and assists with regular 'Come N Try' day events, which allows people with disabilities the opportunity to give water-skiing a go. Belinda is heavily involved with the NSW Water Ski Federation, where she is Vice President for Country Water-skiers and Vice President Director for the Australian Disability Water Ski Division.

Because of her great leadership and volunteer work, Belinda is regularly a guest speaker at different events, which in the past have included the Nursing & Midwifery Showcase in May 2013, World Remembrance Day for Road Traffic Victims in November 2013 and the International Day for People with a Disability at Braeside Hospital in December 2013.

As well as being a champion skier, Belinda is also an award winning horse rider. She currently holds the title of five times Slalom Champion and two times Australian Trick Champion, and has represented Australia several times internationally in the World Disabled Water Ski Championships.

Nominees for UWS Young Women of the West 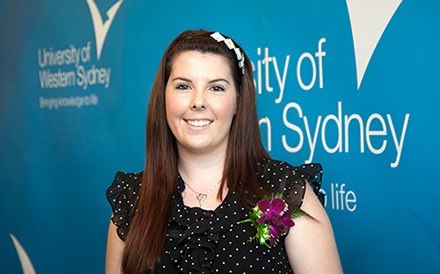 Sally-Anne Donahue, a resident of Wattle Grove, has been nominated for her dedication to Aboriginal health and her to improving the environment in our local Aboriginal communities.

With an Aboriginal background, Sally-Anne uses her knowledge of her people and the environment to improve the health within the local Aboriginal Communities. She dedicates much of her personal time and works tirelessly to gain trust and commitment within these communities. The nature of her work has involved communicable disease and outbreak investigation, tobacco control, and emergency management.

She is currently undertaking a traineeship under the NSW Health Aboriginal Environmental Health Traineeship scheme. Her employment and training is unique - jointly funded by the NSW Ministry of Health, the Public Health Unit (PHU) and the Camden Council. Sally-Anne's dedication and passion to her work within the pilot program, has seen the program succeed and expand across local government with a number of other councils now employing trainees.

Sally-Anne is an ambassador for both Camden Council and NSW health, she has gone to career days to promote the opportunities within the environmental health field to students and is creating great opportunities for Aboriginal people. Jaleesa Donovan, a resident of Milperra, has been nominated for her strong connection to her community and empowering young people. Since her teenage years, Jalessa has dedicated much of her time to community engagement and cultural development for the benefit of communities across Greater Western Sydney.

From a Maltese/Aboriginal background, Jaleesa has a strong understanding of, and sensitivity to, the communities in her local area of Bankstown. Her particular focus has been on projects and initiatives that have engaged with the Indigenous communities of Bankstown and have had a genuine impact.

Jaleesa has instigated, managed and supported a range of successful community projects as well as attending interstate and international forums for both professional and personal development in social and political activism.

In 2010 Jaleesa received the Young Achiever of the Year award from the NSW Local Government Aboriginal Network Awards for her work within the Bankstown Community, and in 2013 she was awarded the Rotary Youth Leadership Award.

Jaleesa is currently studying at the University of Western Sydney to become a primary school teacher and her goal is to close the education gap between Indigenous and non-Indigenous students. Grace Micali, a resident of Liverpool, has been nominated for her tremendous work in the field of science and her volunteer work within the community.
Her weeks are filled with her research and she has a passion for solving problems associated with bacteria that are resistant to multiple antibiotics. This is the subject of her current PhD research at the University of Western Sydney.

Grace is a strong advocate for the Ingham Institute for Applied Medical Research, a not-for-profit organisation that undertakes medical research that has an immediate and practical effect in the treatment and prevention of diseases prevalent in South West Sydney.

Over the last two years Grace has presented her research findings on both a local and international level, and in 2013, she presented at the UWS Molecular Medicine Research group Annual Meeting, for which she received the Presentation Award.

Grace is extremely dedicated to her work and to improving the lives of those connected to her. She is known by all those around her as a highly compassionate and dedicated individual who constantly gives all her endeavours 110%.

During week days she demonstrates practical classes to undergraduate students. She is an excellent mentor to her peers and students and helps whenever she can. As the eldest of six children, Grace dedicates any spare time she has to helping raise her five younger siblings. In the past she has also volunteered for the Auditorium and Advisory Support Service in Liverpool.

Patsy Nai, a resident of Ingleburn, has been nominated voluntary service and advocation of young people within the South Western Sydney Area.

She is currently employed as a full time nurse at Liverpool hospital, however her spare time is dedicated to the many volunteer groups and organisations that she is a part of. She is currently voluntarily serving as the Stake Young Women President with her church and is a community ambassador for many different cultural events. In her presidential role, Pasty oversees 220 young women from the Geen Valley, Liverpool, Ingelburn and Minto areas, where she is responsible for directing and organizing a leadership group, as well as mentoring, teaching and inspiring young women to respect themselves and to serve others.

Two organisations which have benefited greatly from her tireless community efforts are the South West Multicultural and Community Centre and the NSW Council for Pacific Communities (South West Sydney Regional Advisory Council). In 2012 she was instrumental in organising a Young Single Adult Convention with her church group, with over 700 participants over a five day period.

Patsy has received several awards for her voluntary work within the community, including Youth Excellence of the Year & Youth Ambassador of the Year, both from the Campbelltown Chamber of Commerce. As well as a Young Citizen of the Year Award from Campbelltown City Council and a Ministers Excellence Award.

As recognition of her great work, Patsy has been invited to be Master of Ceremony for the prestigious Annual Pacific Awards Event for the South West Sydney region for the past 6 years.

For further information on the UWS Women of the West award please contact the Office of Marketing and Communication on 9678 7512.