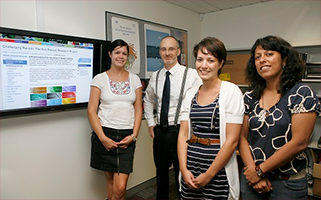 An influential finding from the Challenging Racism Project was that while racism is quite prevalent in Australian society its occurrences vary across space and different spheres of life. Racism is expressed in each region and sphere of life in highly specific ways, and anti-racism should reflect that variation. The project tested the utility of anti-racism templates in rural and urban Australia. The templates were tested for usability by local authorities and NGOs in framing their anti-racism efforts.

Regional typologies of racism, and contextual information, were generated.The project used an entropy grouping procedure as a way of grouping regions within each state or territory of Australia who exhibits similar characteristics based on twenty nine (29) variables. Technical details on the mechanics of the entropy clustering technique are available here: Appendix 3. [PDF, 15.79 KB]

].Anti-racism templates for each regional type were developed, and then tested in case study regions. Fieldwork was conducted in South Australia (2 case study regions) consulting with stakeholders on the utility of the anti-racism materials developed. Fieldwork involved 16 interviews or focus groups sessions with key informants (July 2009; Feb. 2010; March 2010), see Appendix 4 for a copy of the generic interview schedule used for stakeholder consultations. The informants included representatives of local government, local cultural groups, 'multiculturalism service' providers, MRCs, and other relevant organisations. Stake-holder perspectives were gathered on the match between anti-racism templates and existing local policies, on what forms of anti-racism work, and the transferability of the templates.

Local stakeholders perceive the data and resources to be locally relevant and useful for the following reasons: to build the case for programs or for funding bids; to challenge and stimulate interest; as a form of checklist against which local (in)action can be assessed; to provide a stronger illumination of the specific local issues; and to facilitate networking and sharing potential. There was agreement that anti-racism is under-evaluated, due to a lack of resources / time, and a lack of knowledge about how to evaluate programs.

Key questions surround: the extent to which the resources we have developed are 'local' enough (are they too top-down?); the risk of stigmatising / stereotyping place; and the difficulties that local stakeholders have with speaking about racism and using that concept. Localized responses to racism under neoliberalism can be associated with deracialized and depoliticized policies on interethnic community relations. Neoliberal anti-racism promotes competition among local agencies rather than coalition building, and is associated with spatially uneven and non-strategic action.

CRP were invited to address the Human Rights and Equal Opportunity Commission (HREOC) Racism and Civil Society: A National Summit. The resulting report called upon Governments "to implement a program involving local councils, local consultations and local action plans to address racism locally", and they recommended "local governments and local communities do the same". Our presentation made a significant contribution to the final report that the HREOC took to the World Conference Against Racism in Durban (see 2001:30,44). We presented a Key Note Address to the Racisms in the New World Order Conference in Brisbane (9 Dec 2005). The conference communiqué recommended the "[n]eed to recognise the high variability of racism across regions, and to address issues of local history and context as well as local opportunities and barriers to anti-racism". 17 specific forms of local anti-racism were identified and analysed by CRP. Assessment of their relevance, effect and reference to resources were provided. From more information about these anti-racism strategies and resources please see our 'Anti-Racism Initiatives' page.

'Cookbook' of anti-racism strategies and resources

Appendix 5: Characterisations of Groups to help with Development of Anti-Racism Suggestions [PDF, 26.73 KB]