The Conversation: Trump's travel ban is just one of many US policies that legalize discrimination against Muslims

CRPer Rhonda Itaoui has co-authored an article in The Conversation on the discrminatory nature of Trump's travel ban. In particular how it is just one of many policies in the US that constitute anti-Muslim legislation.

Read the full article at The Conversation 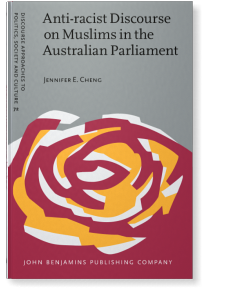 CRPer Dr Jennifer Cheng has a new book out, Anti-racist Discourse on Muslims in the Australian Parliament. The book examines anti-racist discourse in contemporary Australian politics, in particular, how politicians contest and challenge racism against a minority group that does not constitute a traditional ‘race’. Using critical discourse analysis, this book deconstructs the racist, xenophobic and discriminatory arguments against Muslims. It then goes on to highlight the anti-racist counter-discourse to these arguments.

Published by John Benjamins, the book can be purchased here.

The Challenging Racism Project hosted the Australian launch of the HAAS Institute's 'Legalizing Othering: The United States of Islamophobia' report.

CRPer Rhonda Itaoui, currently on exchange to the HAAS Institute, presented the report, drawing relevance to the Australian context.

Read the Legalizing Othering report (opens in a new window).

Learn more about the work of the HAAS Institute (opens in a new window). 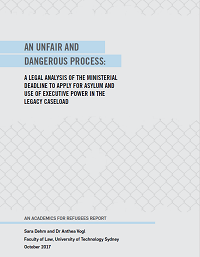 An Unfair and Dangerous Process

Academics for Refugees have released a new report providing legal analysis of the recent ministerial and executive powers on asylum seeker caseloads.

"In May 2017, the Immigration Minister Peter Dutton announced that approximately 30,500 asylum seekers living in the Australian community had until 1 October 2017 – a period of roughly four months – to lodge their full applications for asylum to the Department of Immigration and Border Protection (DIBP). He said that any person who failed to lodge their application for asylum before the nonnegotiable deadline would be considered to have forfeited their asylum claim."

This is a must read for those with an interest in Australia's refugee and asylum seeker frameworks, and in particular the legality of what is occurring.

Read the Unfair and Dangerous Process report (opens in a new window). 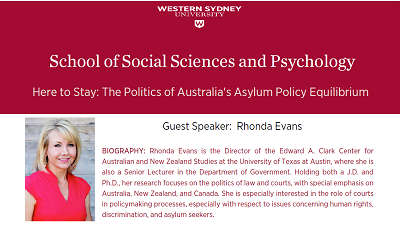 Hizmet and the survival of 'Civic Islam' in Contemporary Turkey

Come along and see Professor Kevin Dunn in discussion with Professor Scott Alexander on Civic Islam and the reform movement in Turkey. 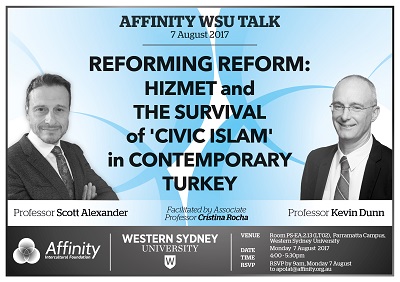 Linda Briskman discusses the Islamophobia in Australia Report which was launched at Parliament House on Tuesday. 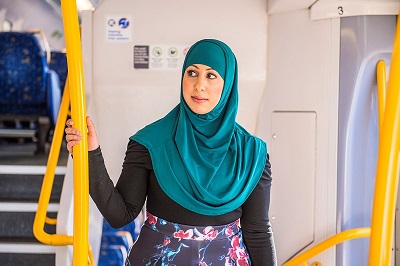 Read the Islamophobia in Australia report.

We have two key concerns about the Government's proposed changes to the Australian citiznship test. 1). The rationale and lack of evidence for the changes; and 2). The consequences of the new questions likely posed, in both misleading the general public through perpetuating stereotypes and the detrimental impact of such stereotyping on minority groups.

We believe Australia's multiculturalism has 'unfinished business'. Many Australians accept cultural diversity, but we still see high levels of dicrimination and racism directed at CALD groups in Ausrtralia. This suggests our rhetoric does not always match our actions and attitudes. We believe that by enshrining principles of multiculturalism into legislation we provide the best opportunity to bridge this gap.

Read our full submission to the Government Inquiry into Strengthening Multiculturalism. The online survey of six thousand residents was undertaken for the SBS documentary, Is Australia Racist? See the full press release here.

Face Up to Racism: Is Australia Racist?

On the 26th of February the documentary Is Australia Racist?, featuring Professor Kevin Dunn and the work of the Challenging Racism Project team will be aired on SBS at 8.30pm. Watch a preview here: